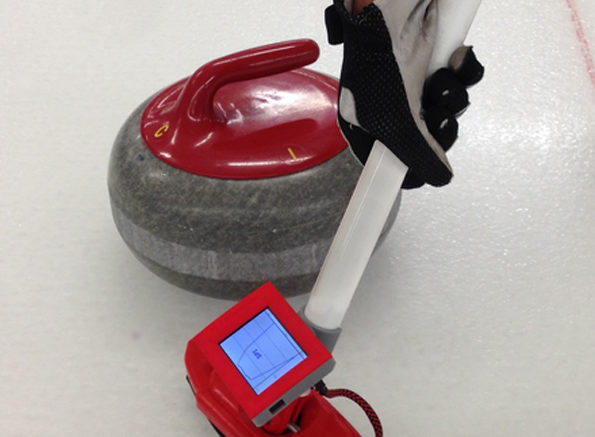 SmartBroom displays real time information for curlers so they can be more efficient when sweeping for a rock. SmartBroom website.

Napanee native Will Hamilton won’t be throwing any rocks in PyeongChang, South Korea this week, but he will still have a heavy influence as to which curling rink reaches the Olympic podium.

That’s because the longtime curling coach has teamed with engineering friends Andrew Flemming and Geoffrey Fowler to develop SmartBroom, a piece of technology that has quite literally swept the sport. So much so that eight of the 13 nations competing at the Olympics have purchased SmartBrooms, which they developed in Waterloo, Ont.

Using sensors in the handle, the broom measures how much force a curler uses while sweeping, as well as their frequency. All data is instantly displayed on the base of the broom in graph form. When piled together, the data allows curlers to make the most effective use of their sweep strokes, all composed together in an easy to understand “Sweeping Performance Index.”

The unique technology allows for the first time a comparison of two sweepers to see which has achieved a better SPI. Prior to that, it was simply a guessing game using the naked eye.

“I was coaching a junior ladies team in 2012,” Hamilton said when asked for his inspiration behind his creation. “These girls weighed 110 pounds soaking wet with their snowsuits on. I always wondered what exactly they were doing to the ice. I sat down with Andrew Flemming, one of my partners, and I said ‘Listen, let’s take apart a pedometre and a bathroom scale and put it into a curling broom and see what sort of data we can get.’ He looked at me and said ‘Will you’re an idiot. We would never do that.’ Him and Geoffrey Fowler, they’re both engineers. They said you’d use force sensors and accelerometres. Then I said ‘OK, let’s built it.’”

Those who know the game are quite familiar with just how important sweeping can be. While it may seem simple to the average onlooker, the right amount of sweeping could mean the difference between stealing points or losing a frame.

Once built, they then had to convince curlers — many of whom have trained a certain way their entire life — that they had a better way. Curling Canada saw the benefits right away, agreeing to use SmartBrooms to train for the 2014 games in Sochi. They trio had a gentlemen’s agreement not to sell to any other federations until after the 2014 games.

Canada swept to gold in both men’s and women’s curling in Russia. From there, interest has grown outside the Great White North.

“I can start to see the evolution of some of the players,” Hamilton said of watching the sport’s elites starting to adapt his technology into their game. “I know they have access to (the data from a SmartBroom) because you can tell that they’re working on it. They’re changing their sweeping style, they’re making technical changes and I’m seeing the results when I watch them play.”

He’s already had some of the game’s best, including American Will Hamilton (no relation) acknowledge how much the broom has helped his game.

“Even for him just to acknowledge it, that’s a high level player, is awesome,” said Hamilton.

He sees his creation as having the potential for wide reaching implications for the sport. Everything from providing more in depth stats for television broadcasts to skips being able to scout out the best leads, seconds and vices for their curling style.

“There’s no one way to sweep anymore,” said Hamilton. “Whereas before we thought there was. There was an eye test where I’d look at an athlete, they’re huffing and puffing, they’re sweating, they look like their exerting energy, therefore they must be a good sweeper. Now we know that’s not necessarily true. They may not be an efficient one or as efficient as they could be.”

Now that his technology is no longer in sole possession of Canadians, he admits he’ll be a bit torn when watching the OIympics this week.

Along with the Olympics, he’ll get the added exposure of a feature on the Discovery Channel, which is slated to air this week.

SmartBroom isn’t limited to elite curlers either, as curlers from all levels have shown an interest in the technology. They’re available for purchase at www.smartbroom.ca.