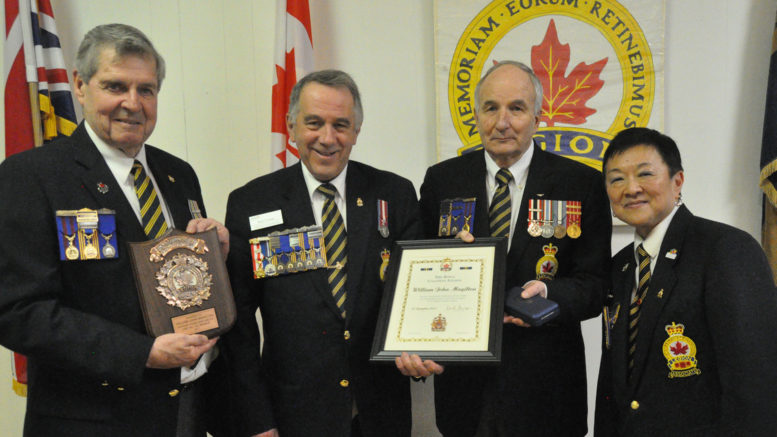 Presentations of a high honour and a new award helped produce a super Sunday at the Lt.-Col Harry Babcock Royal Canadian Legion Branch 137.

That afternoon, about 70 people gathered at Perrin Hall for the branch’s annual honours and awards luncheon, which celebrates the many contributions of volunteers throughout the year.

District commander Dave Cormier stated he was impressed with the way the Napanee branch recognizes the value of that work.

“This is utterly amazing. I was here two years ago and I was just taken aback then how much you get it and how you understand how important members are and volunteers are to your branch,” he said. “Volunteers are the heart and soul of a Legion branch. Without volunteers, our veterans would not get the proper help and guidance they need for a good quality of life. Without volunteers, a branch could not hold the events that allow them to support their community.”

A highlight of this year’s ceremony was the presentation of the Meritorious Service Medal —arguably the highest honour the Legion can bestow — to Jack Magilton.

A 25-year Legion member and a life member of the branch since 2012, Magilton has held nearly every post at the Napanee branch since he moved to the community with his wife, Bonnie, after retiring from the Canadian military in 2004. Awards and honours chair Tim Smith said since his life membership, Magilton “has continued to carry out a number of endeavours with tireless energy and outperforms many members half his age.”

According to Smith, Magilton was instrumental in getting the branch back on track after it fell on hard times about a decade ago.

“About 2008 or 2009, we ran into some difficulties here in that we were in debt quite extensively and the building needed a lot of repairs. It had been neglected and, perhaps, mismanaged. Jack was asked by higher command if he could see the good or do anything,” Smith recalled.

“Things started falling into place and we’ve never looked back. Jack was the driving force behind that. He’s had every position you can think of — he’s been our president, past-president, and sat on the finance committee. He helps veterans. He quietly goes about his business and he’s very well thought of in this Legion. He’s been a stalwart,” Smith said.

Magilton told the Beaver he joined the Legion because he believes in veterans’ causes and he wanted to help his fellow veterans. He also was a member of Legions in Ottawa and Kingston, but the Napanee branch has become home. 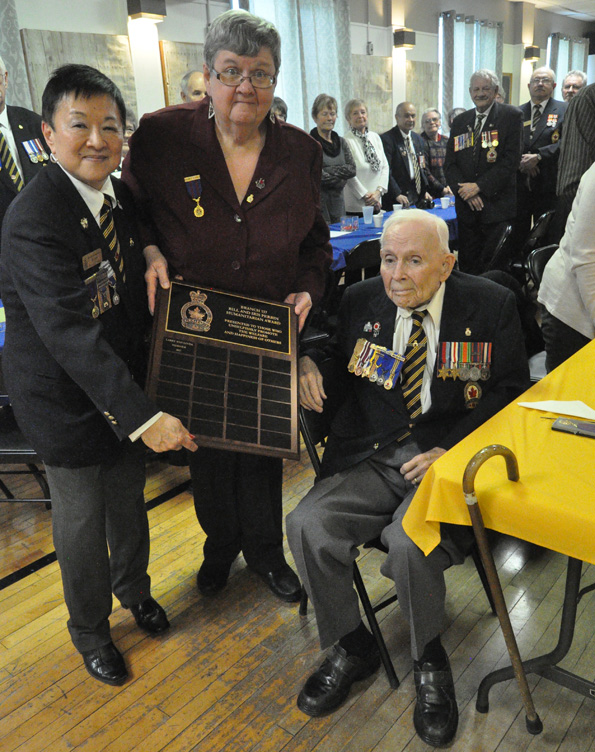 “I’ve got a lot of good friends here and I really like what the Legion does for our community,” he said, adding he doesn’t spend as much time at the branch as he once did, but he’s still there a few days a week, working the Friday lunches and volunteering for the Poppy Fund campaign.

“It’s a surprise. That’s pretty flattering, actually. I’m very proud to receive it. It’s not something you start off looking for, but I really appreciate it.”

According to Smith, the Napanee branch boasts three winners of the award as Bill Perrin and Dave Gordon, a former executive director of the Legion’s Ontario Command, have also been recognized. 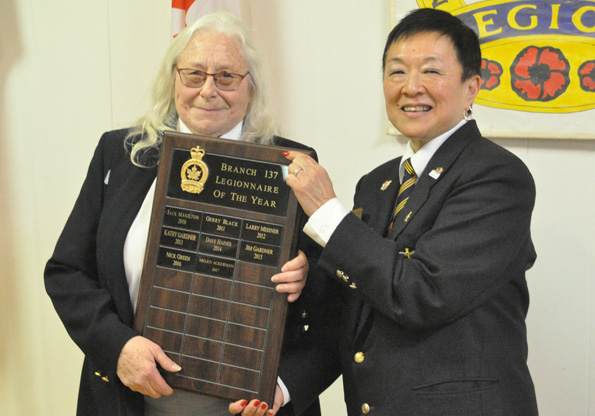 Smith said the branch’s Legionnaire of the Year Award goes to “somebody who goes that extra mile and does that extra thing that makes our Legion” and, often, that person has done so for several years. This year, the award went to secretary/treasurer Ackerman, who is a 30-year member. She has been involved with the branch’s ways and means committee, its concession booth at the Napanee Fair, Poppy Fund campaign, finance committee, and entertainment nights. Ackerman is also responsible for the branch’s lottery activities, including the popular Catch The Ace draw.

“Her biggest strength is her bookkeeping,” Smith said. “She keeps all our feet to the fire with money and can account for every penny. At any given time, this Legion knows where it stands financially. The award is well deserved.”

This past year, Smith said the awards and honours committee decided to create a special award in honour of Perrin and his late wife Iris that would recognize humanitarians in the branch, individuals or couples who make life better for their fellow human beings. The first recipients were Linda and Larry Meisner. Linda received a standing ovation as she received the award following a year of giving in trying circumstances.

Larry, himself a veteran of the Canadian Forces for over 30 years, had been the branch’s Poppy chair for several years. He was diagnosed with cancer last year and he passed away Oct. 20 in the thick of the campaign. Smith said as a couple, the Meisners had always made a concerted effort to ensure the campaign did well. This year, Larry wanted Linda to continue it. Volunteers rallied and the campaign was the best Napanee ever had as $29,667.10 was raised for causes that benefit veterans and their families.

“Larry would have been so proud of everyone who volunteered to make this year’s campaign such a success,” Linda said.

Smith said the fund has helped the branch buy needed equipment for the Lennox and Addington County General Hospital and support many community programs for youth and for seniors.

During the ceremony, Perrin, Gordon, George Pauls, and Bill Cormier received each received a Branch Service Medal for their community work and efforts within the Legion.

Looking to the community, the branch recognized Country Traditions and the Victoria Lodge, AF & AM 299 for their efforts in helping with the food booth.

Some 57 Legionnaires were invited to receive service pins for reaching milestones years of membership.

Magilton said Sunday was a special day to honour many important people keeping the Legion alive.

“It’s amazing. There’s so much talent here. We’ve got 350-plus members. Not everyone is active and, of course, there are reasons for that. The ones who do volunteer, well, there’s a lot of talent there and they all bring different things to the table to help out,” he said. “Today was just a nice day. Tim Smith does a great job on our honours and awards. I think it’s probably the beset honours and awards function of all the branches around.”