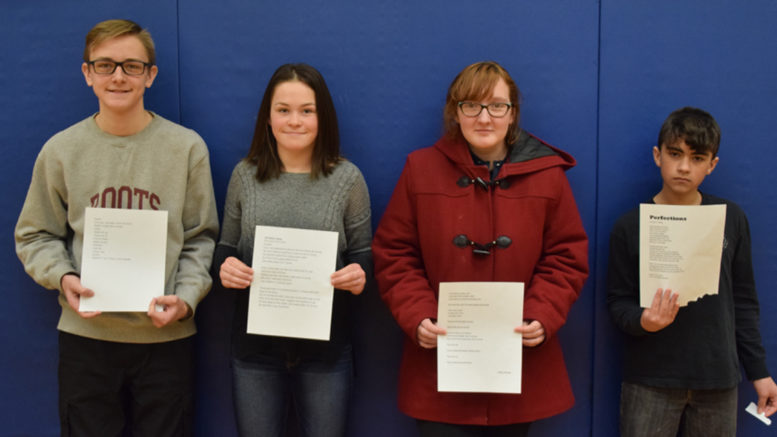 A quartet of Enterprise Public School poets earned national recognition last week as they learned their work would be included in Catch the Whispers, a Canadian anthology of student poems.

Andrew Fanning, Jillian Wright, Daniel Rines and Maeve Kennedy will each have their creations included in the publication.

Now in Grades 7 and 8, the students submitted their work last year to the publication and learned last week it would be included in the book, which includes submissions from students across Canada.

They were given very few guidelines, told only that their poem must be longer than 10 lines, shorter than 28. From there they were given free creative reign.

“It was about if the world were more perfect,” Fanning said of his poem. “What I plan on doing when I grow up. Start a company, make everything free.”

He took inspiration from observations he’s made in his everyday life and his ideas to improve the world.

“It just started from how frustrating the world is at the moment right now.”

Wright, now a student of Southview Public School, wrote several poems last year before deciding which one she would submit for consideration. In the end she chose one where encouraged people to get over their self-conscious doubts and just be themselves.

“It’s basically when people see you, what they’re thinking and how you feel,” she explained. “But it’s not always that way.”

Rines chose his hobby, playing poker, for his muse.

“(The poem) is about what I would buy if I won,” he said. He also drew inspiration from the strategy involved in the card game.

Kennedy was sparked by a subject her class was studying at the time.

“Mine is about the Indigenous people,” said Kennedy. “Last year we did a big project on the residential schools, so I wrote a bunch of poems about it.”

The one she submitted takes a look at life through a young Native as she tries to see things from their perspective.

The book is now available online at www.youngwritersofcanada.ca/bookstore/ and will be shipped in the spring. Enterprise Public School will have a copy on hand in its library so students can appreciate the work of their classmates and perhaps get inspired to write for next year’s anthology as well.