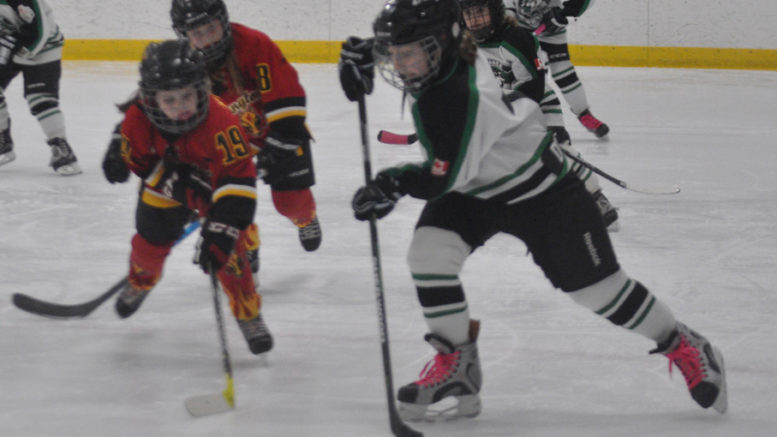 Ryan DuChene of the Napanee Novice B Crunch (right) carries the puck while a Clarington Flames player challenges. Photo by Adam Bramburger.

It’s on to the second round for three more Napanee Stars teams. Following the Atom BBs earlier sweep of Stirling, The Peewee BB team also swept Stirling, winning 16-1 at home, and 10-1 on the road.

At the SPC, seven different players did the damage for the locals with a balanced attack, and relentless pressure. They will face Prince Edward County next.

– The Calderwood Automation Peewee AE Stars were solid 13-2 winners in the third of a best of five series played in Lindsay to advance against Collingwood.  After two close matches, the team elevated its game to finish strong.

– The Atom AE Stars put together another solid offensive game to sweep Lindsay on Saturday with a 5-0 shutout in a match played at the SPC.

Goalie Jack Godfrey contributed in the shutout with effective work. The team got goals from Malcolm McCaw (two), Sophie Fraser, Sam McCaw, and Wyatt Albright. Jacob Cox and Malcolm McCaw each had a pair of assists, with singles attributed to Evan Gaffney, Ben Szuch, Sam McCaw and Nate Vanburkel. They will face Collingwood next.

– The Bantam Stars split games with Lindsay on the weekend to remain ahead, now 3-2 in the best of seven series.

On Saturday, they let a 2-1 lead slip away late in the third period with Lindsay scoring during a 6-on-4 man advantage to take the game to overtime. Their hosts scored early in overtime to take the game by a 3-2 score.

Sunday was a different scenario, however as the boys played inspired hockey by finishing checks and applying pressure on their guests. After Emerson Kennelly gave up an early goal, he held the fort the rest of the way. Quinton Pierce made it 1-1 as a tipped point shot tallied.

Still in the first, Andy Ruttan picked their pocket at their blue line to go in alone for the winner. Oronhyathe Green got a tap in on a puck left against the right post and Jacob Boutilier sent a clearing shot into an empty net after Lindsay removed their goalie for an extra attacker. The series continues in Lindsay on Saturday.

– The AFW Construction Stars were 5-3 winners in Picton, but were edged 3-2 in Newcastle as they reached the half way point in their 12 game round robin with six other teams.

They are presently tied for second, with only two teams advancing. The will be home to Ennismore Sunday at noon.

Maddie Burgess earned the shutout.  Katie Hearns and Rayanne West each had a goal and an assist while Megan Morrow and Emma Schmidt each had a goal with  assists by Brooklyn Benn and Amber Weese.

– After finishing the regular season in first place, the Peewee BB Crunch have a bye in the first round.

With that first round slated to be finished in three weeks, they have had to seek out other teams to play.  Though the Kingston Ice Wolves AA team did not make the playoffs, they get to go to provincials by default, meaning they are off for the next three months.  Both clubs were able to secure a home and home series with them this weekend.  Despite the Ice Wolves being a team that plays two levels above the Crunch BBs, Napanee came out of the games with a 1-0 loss and a 2-0 loss.  The Crunch carried the play at times and made the games a back and forth affair.