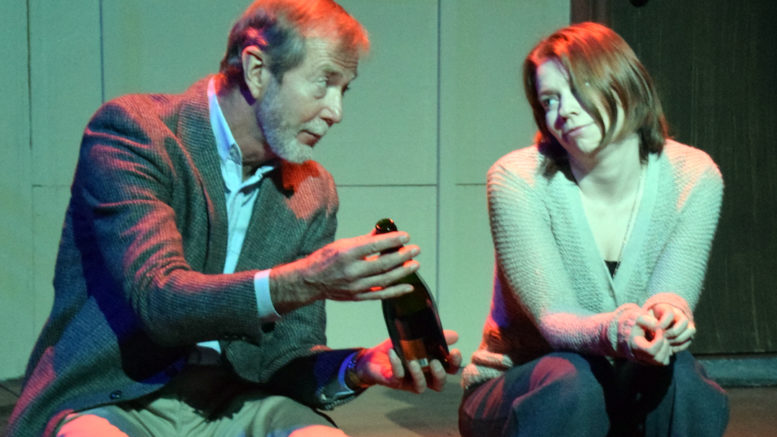 Andy Palmer and Jessica Duchaine run through a dress rehearsal of the upcoming play Proof, which will be stagged at the Lennox Community Theatre starting Feb. 9.Photo by Adam Prudhomme.

Lennox Community Theatre will get a bit serious for its next production as they stage David Auburn’s Pulitzer Prize-winning Proof, which debuts Feb. 9.

“(Robert) sort of slowly became mad,” explains director Geoff Johnson.  “He’s this brilliant mathematician. The play starts as he’s passed away. Catherine’s sister (played by Sandy Johnston) is coming back to help clean things up. Then there’s also a young student here, (Hal, played by Lukas Duchaine). He’s going through all the notebooks looking for one last piece of brilliance Robert may have written.”

In his search he comes across a mathematically proof that will completely change the study of prime numbers. The play then revolves around Catherine’s challenge of trying to prove her father’s brilliant discovery while dealing with her own demons as well as her strained relationship with her sister.

“It does have some funny stuff, a bit of mystery, a bit of romance, a lot of family strife,” says Johnson.

The content, as well as some of the language, is a bit heavier than most of the productions put on in Selby. Johnson says it would be geared towards a bit of an older crowd.

“It’s a wonderful show, it’s so well written,” said Johnson. “The characters are really well written and the cast is phenomenal. It’s not going to be everyone’s cup of tea but I certainly hope everyone that does come that they’re going to love it.”

Johnson says he realizes that after a long week of work audience members are looking to unwind a bit and perhaps escape the cold of February.

“It’s got a lot of strive but it does have a nice ending,” he says. “It’s not like it ends on a downer.”

The play was first performed in 2000 and along with a Pulitzer, it also won the Tony Award for Best Play. In 2005 it was adapted to the big screen starring Gwyneth Paltrow, Anthony Hopkins, Hope Davis and Jake Gyllenhaal.