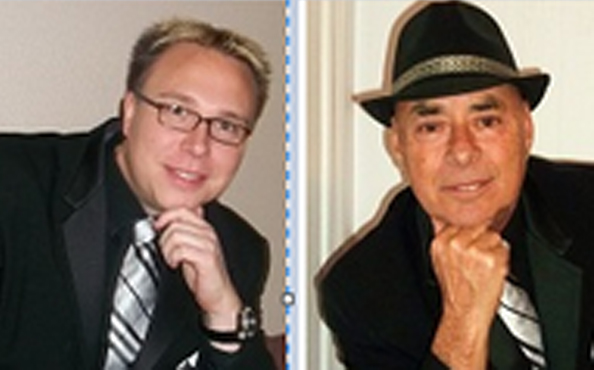 John Malcolm (right) and son Reagan Smith will perform as A Bit of Nostalgia on Feb. 18 at the Napanee Lion’s Hall in support of L&A SOS.

A Bit of Nostalgia will return with their songbook that spans four decades on Feb. 18 for an afternoon of oldies but goodies at the Napanee Lions Hall.

The concert, which will include covers of hits from the 1940s, ‘50s, ‘60s and ‘70s, will serve as a fundraiser for Lennox and Addington’s Seniors Outreach Services.

“We do Frank Sinatra, Elton John, Johnny Cash, Billie Joel, just about everybody,” said John Malcolm, who makes up the duo along with his son, Reagan.  “There’s something for everybody.”

The local act is no stranger to the Lions Club, having performed for SOS fundraisers in previous years. Malcolm is known for his spot -on impersonations of “Ol’ Blue Eye”  himself while his son has the vocal range to hit the high notes in the classic song “Sherry Baby” by Frankie Vallie and the Four Seasons while reaching the low notes of a Johnny Cash hit.

The crooners will share the stage in a Las Vegas style lounge show, bringing back memories of all the biggest stars from the past. They’ve shared the stage with acts such as Jerry and the Pacemakers, Terry Sylvester of the Hollies, The Diamonds, The Marvelettes, The Platters, The Inkspots, Badfinger and Billy J. Kramer, among others.

For Malcolm, the event is about taking the audience back to the glory days of their favourite artists while raising money for a worthy cause.

“There’s so many people that need things but the seniors, quite often they are the ones that are overlooked,” said Malcolm. “It’s nice to help out and they’ve got a great association in Napanee. It goes right into the community and stays right there.”

Along with this month’s show, A Bit of Nostalgia, along with Canadian Idol winner Ryan Malcolm, will be supporting L&A SOS in May when they join the cast of Sinatra, The Man, His Fans, His Music at the Grand Theatre in Kingston. The show will include several of Sinatra’s hits as it follows the story of five of his most devoted fans recalling personal interactions with the legend himself.

Money raised from that four show run, May 10-12, will also go towards L&A SOS and Seniors Association Kingston Region.