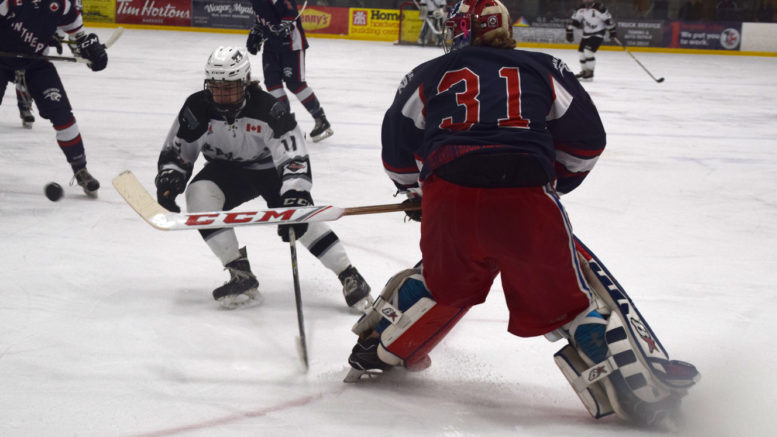 Port Hope's Sheldon Calbury clears the puck just before Napanee's Cullen Hinds can get a stick on it. Photo by Adam Prudhomme.

Their 13 game win streak snapped the night before by the visiting Port Hope Panthers, the Napanee Raiders came back with vengeance on Saturday night in Campbellford, pasting the Rebels 14-1.

Ryan Casselman, Griffen Conger and Austin Labelle each had a hat trick in the rout, while Riley Steeves and Jacob Murphy each potted a pair. Brendan Hagerman had one to round out the scoring. Labelle also chipped in with five assists on the night for a team high eight point game, followed closely by Casselman with seven. Those seven points pushed Casselman over the century mark for the season at 101 with 42 goals and 59 assists. He continues to pace the PJHL scoring race, leading teammates Steeves (70) and Labelle (64). Port Hope’s Cameron Harris is fourth (63).

Nicholas Nabuurs picked up the win on Saturday, stopping 15 Rebel attempts. Joey Dyson was the lone Rebel to best him on the night, breaking his shutout at the 11:17 mark of the second. By that point in the game the Raiders had already built a 7-0 advantage.

Despite their double-digit output, the Raiders were held scoreless in all seven of their power-play attempts. They played an extremely disciplined game however, drawing just one minor penalty the entire game, a slashing call on Labelle.

The Raiders outshot their opponents 63-16 on the night.

Napanee may have been taking out their frustrations on the last place Rebels following Friday’s 3-2 loss to the Panthers.

In what could possibly be a league finals preview, the league’s top two teams delivered a fast-paced, hard-hitting game with a playoff feel Friday night at the SPC.

The Raiders missed out on a great scoring chance midway through the first, sliding the puck through crease but missing the open net by inches. Port Hope goalie Sheldon Calbury recovered in time to cover the corner and deny Jake Campbell a great scoring opportunity from the side of the net. 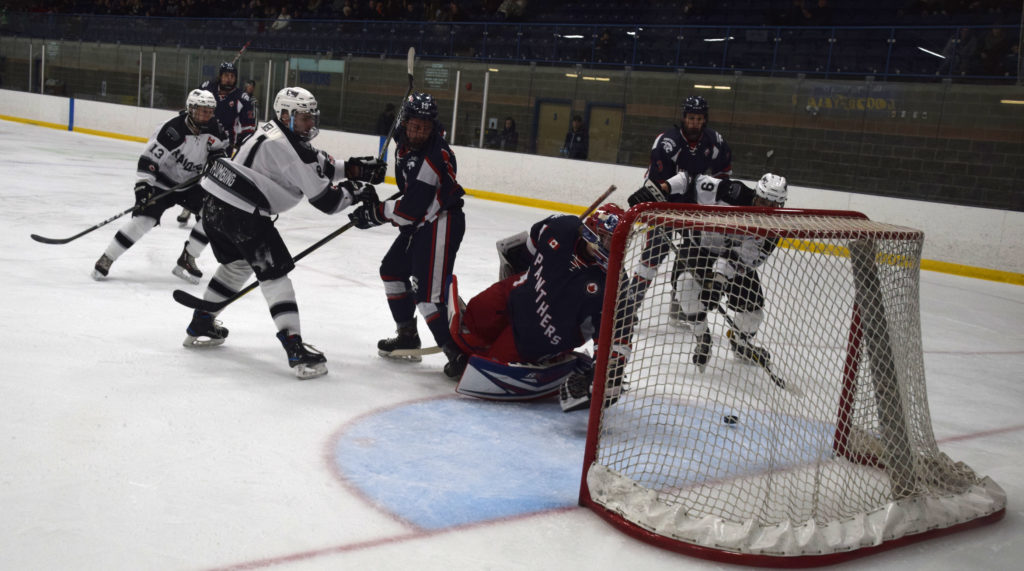 Napanee’s Jake Campbell races to bury the puck into the open side of the net. Photo by Adam Prudhomme. 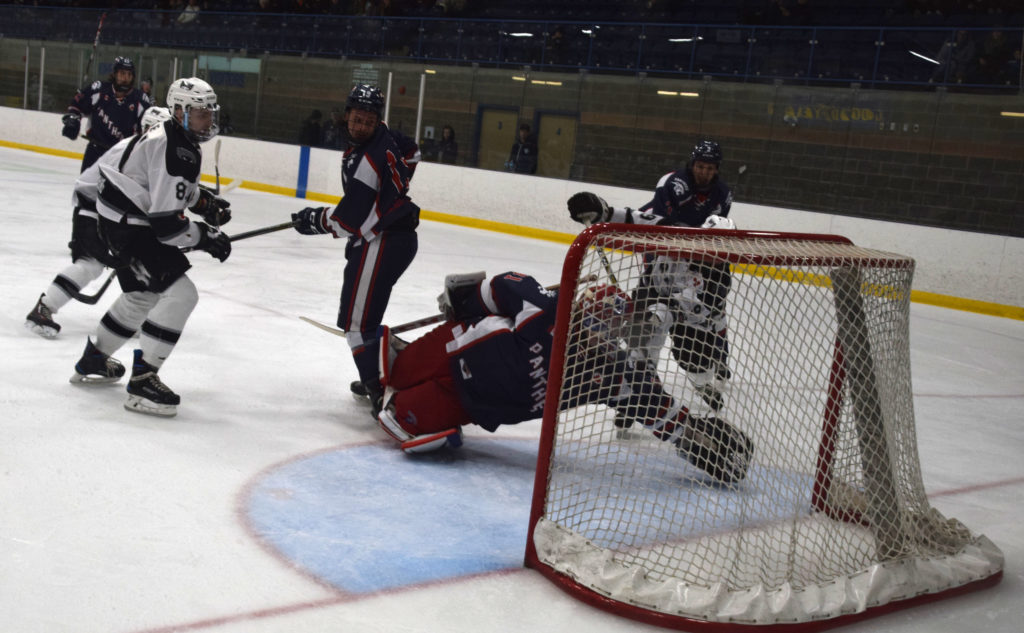 Sheldon Calbury gets back in time with a diving glove save to deny the scoring opportunity. Photo by Adam Prudhomme.

Casselman put the home team on the board a few minutes later, converting on a feed from Labelle for a power-play goal.

That one goal lead held until the 16:22 mark of the second, when Nathan Snoek knotted the game at 1-1.

Snoek was at it again in the third, scoring at the 6:03 mark to give the Panthers their first lead of the night. Hinds responded for Napanee just over four minutes later to set up the tense finish. Chances were hard to come by in a tightly contested final 10 minutes, but in the end it was Evan Foley who put the Panthers up 3-2 with just over four minutes to go. Port Hope’s defense shutdown Napanee the rest of the way to secure the victory.

Jeremy Piazzi started the game, stopping 22 of 23 shots before leaving in the third with muscle cramps. He gave way to Nabuurs in the third who allowed the final two goals.

There was no love lost between the two rivals as Port Hope earned 28 minutes of penalty time with 10 infractions while Napanee had 30 minutes with 12 calls. Tempers boiled over as time expired as Zach Knapp-Hermer was handed a slashing penalty while Kent was charged with a face mask. Raiders head coach Mike Hartwick was given a game misconduct for leaving the bench.

Prior to Friday’s loss, the Raiders had picked up at least a point in 30 straight games, a streak that dated back to the second game of the season. They went 29-0-1 over that span. Port Hope remains the only team to best Napanee in regulation, doing so on Opening Night prior to Friday’s win. Napanee’s 13 game win streak fell short of the 16 gamer they had from Sept. 17 to Nov. 12.

The Raiders will return to action on Friday when they’ll welcome the Gananoque Islanders to the SPC for a 7:30 p.m. puck drop. On Saturday they travel to Port Hope for a rematch with the Panthers. That meeting will also mark the final regular season meeting with their chief rivals prior to a possible playoff matchup. Should Napanee win both their games this weekend, they would officially clinch the top seed in the Tod Division. If the Raiders can win out over their final seven games, they could still eclipse the franchise’s all-time season point record, which they set in 2008-09. That year they earned 74 points. If they pick up two points over their final seven games, they’d finish with 75.