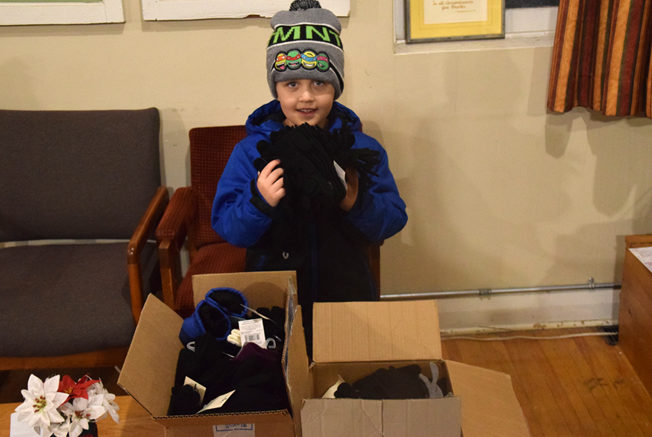 Owen Hewett shows off the 121 pairs of gloves he donated to Morning Star Mission. Photo by Adam Prudhomme.

As much as Owen Hewett despises wearing his mittens in the winter, he hates the fact that some kids don’t have mittens to wear even more.

So last year when the then three-year-old Napanee native heard about kids who don’t have mittens to wear this time of year, he decided to take action, raising money to buy 121 pairs of mittens to donate to the Napanee Salvation Army. He doubled down on his efforts again this winter, buying an additional 121 pairs for the Morning Star Mission.

“Owen was getting dressed for school last year and he didn’t want to put his mittens on,” recalled his dad, Darren Hewett. “I tried to talk to him about how important they are, I told him ‘some kids aren’t fortunate enough to even have mittens.’ He was like ‘oh wow, I’ll put them on.’”

He didn’t think much about it until his son brought it up again after school.

“Later that night he said he wanted to buy mittens for kids,” said Hewett. “I thought that’s nice, a three-year-old saying that, it’s a great gesture and then never thought much about it. A couple of days later him and I made a bet, something like what episode is on TV. He lost and I said ‘Owen you owe me $5.’ He started to cry and I was ‘it’s not that big of a deal.’ But he said ‘I have to use that money to buy mittens for kids.’ That’s when I knew he was serious about this.”

Through the help of friends of family, Owen began to scrape together as much money as he could into his piggy bank.

“I want to donate (mittens) to the kids that don’t have them,” he said, noting how sad he felt when he learned of kids with chilly hands in the winter.

When it came time to make the purchase, he was given a discount by the local Napanee Wal-Mart to help him buy even more mittens for those less fortunate.

On Wednesday he stopped by the Morning Star Mission to donate two boxes full of mittens to help those less fortunate.

While he still may not always want to wear his mittens, he’s gone above and beyond to make sure those less fortunate will at least have the option of wearing theirs, should they so choose.