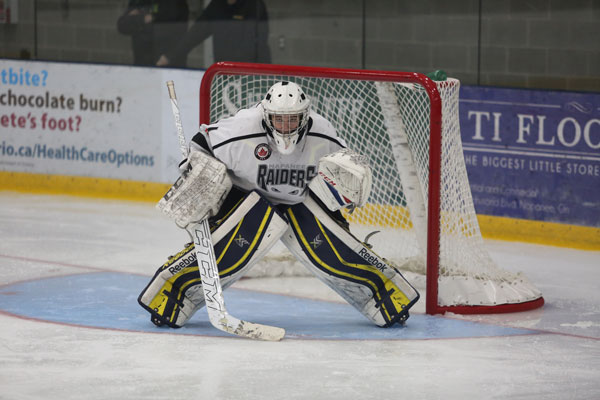 Jeremy Piazzi picked up the win against Picton.

Operating with a skeleton crew of 11 skaters and a goalie, the Napanee Raiders still had little trouble dispatching the Campbellford Rebels with a 10-1 road victory Tuesday night.

Initially scheduled for Saturday evening, the game was moved to Tuesday due to an ice conflict. Being so close to the holidays and into the post-secondary exam period, the Raiders had a limited number of players on hand, but still brought plenty of offence.

Ryan Casselman got Napanee on the board with a goal 12:20 into the first, followed by a power-play strike from Brendan Hagerman at the 17:03 mark.

Josh Murphy, Jake Campbell and Casselman all scored in the first half of the second period to give the Raiders a comfortable 5-0 advantage.

Campbellford’s Matt Moran broke the shutout early in the third, but it was too little too late. Despite the short bench the Raiders had a strong finishing kick, as Riley Steeves scored three goals while Justynn Steven and Murphy had one to push the Raiders up to double digits.

Tuesday’s game was the only action for the Raiders this week as Friday’s meeting with Gananoque was postponed due to the weather.

Scheduled as the Raiders’ annual teddy bear toss game, the team plans to hold that event at a home game early in the new year.

After a holiday break, the Raiders will return to action Jan. 3  in Campbellford at 8 p.m. On Jan. 5 they’re home against Picton at 7:30 p.m.