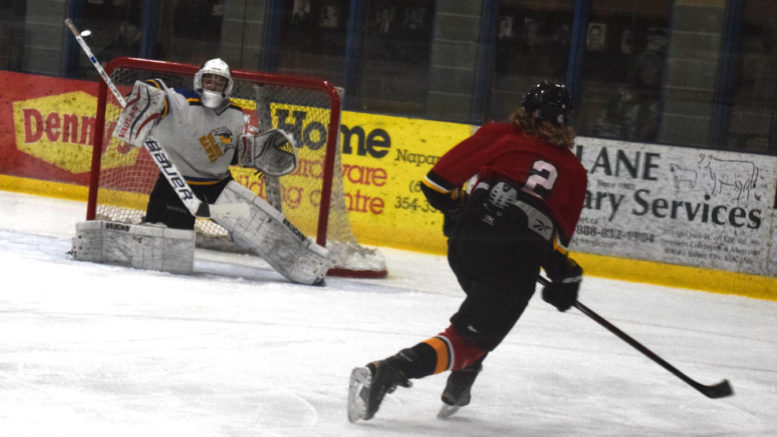 Seth Lee kept the Hawks in the game early as the NDSS netminder turned in an outstanding first period. He was tested early and often as Sydenham dominated the time on attack but managed just one goal.

That 1-0 advantage held until late in the second, when Josh Cudd slid a pass right in front of the Sydenham net to Corbin Gibson, who flicked the puck into the net.

Cal DuChene scored the eventual game winner near the midway mark of the third, converting on a pass from Marshall McFarland and Nolan Hunter.

Issac Uens tacked on an important insurance marker with 4:50 to go in the game, launching a shot from just inside the blue-line that floated through traffic and into the back of the net. Cudd earned an assist on the play.

Gibson iced the victory with an empty-net goal in the final minute, flipping the puck from deep inside his own zone across the Strathcona Paper Centre ice surface and into the middle of the open cage.

“We played (Sydenham) in a (pre-season) tournament in Kingston and they played the same way,” Hawks head coach Jeff Birchard said following Monday’s win. “They came out real strong and out skated us and as the game progressed we got a bit better, except they had already scored three goals by the time we got going.”

Birchard credited Lee for holding the Golden Eagles to just a single goal while the NDSS offense sorted itself out.

“They always seem to get right on you,” he said about Sydenham.

The win gives Napanee a 3-0 record and guarantees they’ll head into the    Christmas and exam break with at least a share of the top spot in the league. They won’t return to league action until Jan. 9, when they’ll take on the KCVI Blues at Kingston’s Invista Centre. They won’t be home again until Jan. 15, when they will will welcome La Salle to the SPC.

NDSS’ girls hockey team posted a 7-2 win over La Salle last Wednesday and then skated to a 2-2 draw against Frontenac on Thursday to close out their 2017 league play. The lady Hawks are now 2-0-1 on the year.

They’ll take on Holy Cross on Jan. 11 at the SPC, opening up 2018 against their longtime rivals. The two teams are once again looking like strong contenders to once again meet in the KASSAA finals, with the Crusaders leading the league at 3-0, two points up on second place Napanee.

Though league play wrapped up for the Christmas break, the Hawks were scheduled to host their annual invitational tournament yesterday at the SPC. Results weren’t known at press time.