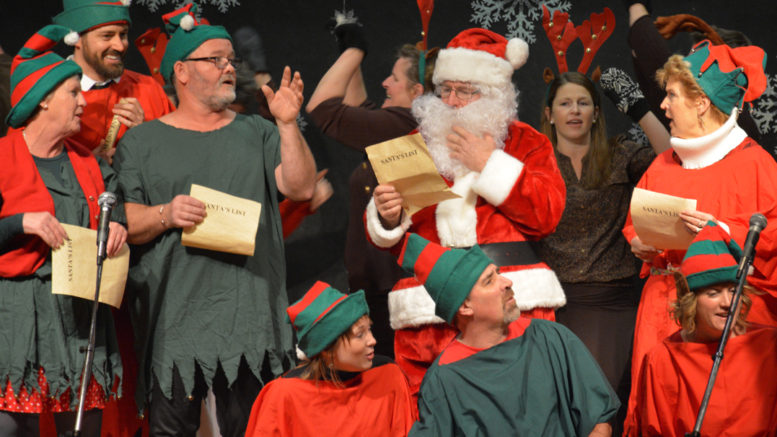 The always popular Newburgh Community Concert will still be seen this year, though not on stage. Instead it will be broadcast on YouTube starting Dec. 5 at 7 p.m. File photo.

North Pole or Newburgh Public School’s gym? It was hard to tell at the 38th annual Community Christmas Concert Saturday.

Hip-hop reindeer, a hilarious spin on “The Twelve Days of Christmas” and a lot in between treated families that lined up long before the production’s afternoon and evening shows began.

For a lot of locals, whether onstage or in the audience, the excitement is how the show brings longtime friends and relatives under one roof.

“The reason we started this was to have the community come together in a very organic kind of way,” said director and producer Mae Whalen, who has been involved with the concert since its first run 38 years ago.

Most of the crew has been taking part for over a decade, but their fun-loving nature leads to every year being very different than the last.

This year’s show picked up on Canada 150 themes, with Justin Trudeau and Santa Claus working together for one skit. Plays on issues like finding the right gift for a spouse also got plenty of laughs, while time was made for Christmas songs and poetry.

Excitement aside, it’s also all for an appropriate cause: giving.

Before the holiday ensemble first made its way to stage, Whalen told the gym that last year’s efforts raised $16,700 in donations toward Christmas gifts for 135 less-fortunate children. This year, it surpassed that total, raising $18,400. 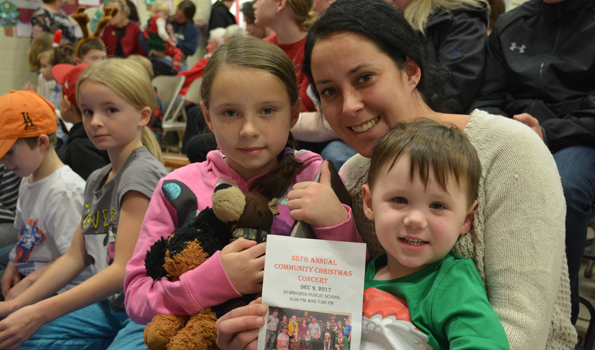 Arizona and Christopher Celestini enjoy a front-row seat with their mom Tisha at Newburgh’s Community Christmas Concert on Saturday. Photo by Justin Medve.

The day after the show, it’s tradition for cast, crew and volunteers to do the shopping together.

“We buy clothing, pajamas, socks, underwear, mittens, hats and at least two toys for every child. So that they have the full Christmas under the tree and lots of presents to open,” Whalen said.

The importance of that opportunity is something stage director Kate Myers said she’s held close since participating with her mother years ago.

“We were providing them with the opportunity to have a different kind of Christmas than what they might have had otherwise,” Myers said. “My very favourite part is when we start loading those bags tomorrow afternoon.”

The effort is also made possible by KFLA Family and Children’s Services and the Limestone District School Board, who are able to help provide gifts to the families who need it most.

Many other local groups and businesses also sponsor the show and its outcome, including the Napanee Valley Cruisers, which had an announced donation of $1000 this time around.

Local parent Tiffany Donnan told the Beaver the show was a great mix of humour and heart that her whole family enjoyed.

“It’s hilarious and funny but they also are talking about what Christmas is actually about,” Donnan said.

But of course, Christmas is about the ones around us.

“You see your neighbours and see you see people you know – they’re giving back and it’s important that we feel like we’re part of that,” Donnan added.

“It’s a labour of love for us all. We’ve been together for so long now. We laugh and we think we’re the funniest people on earth,” Whalen said.