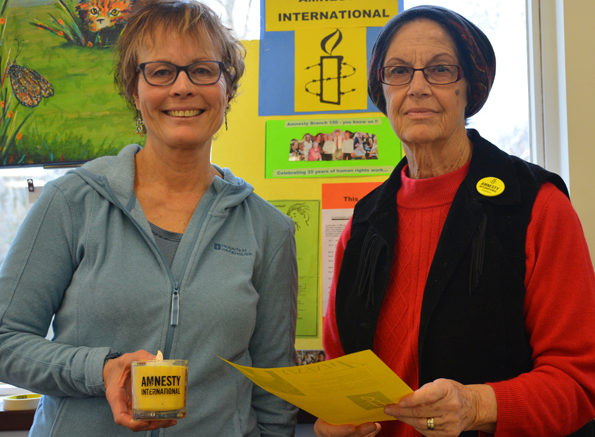 In today’s progressive society, the people’s voice is becoming louder and more important than ever – but for those who aren’t able to speak up, there’s support from members of the human rights advocacy group Amnesty International.

“We do have choices and a say in how we are treated, so we definitely want to help others that don’t have access to that,” said Linda Murray, chairperson for Amnesty International Napanee.

The group, which primarily writes letters to governments to persuade a change of ethics, held its annual information-session at the Napanee library this Saturday, one day shy of Amnesty International’s Write for Rights event and International Human Rights Day on Dec 10.

The now seven-million-strong collective of investigators, writers and concerned citizens has spent decades drawing attention to injustices all over the world. Local branch members meet monthly to discuss and protest the heavily-researched issues brought to their attention.

“When you get millions of people sending mail, email and faxes all in a one or two week period, they know they can’t hide anymore,” Murray said.

Of course, behind every human rights issue are individuals experiencing it. Amnesty International members sometimes have the chance to write letters to victims and their families, who are often imprisoned or lack the freedom to protest their situation.

“They don’t take on an issue or a particular prisoner of conscience or victim of human rights without it being vetted about 10 different ways to make sure it’s bona-fide and current,” Murray said.

Murray recalled one particularly impactful campaign: a journalist serving time in an east-African country had close to 18,000 letters of support unknowingly sent to him – 6,000 of which were from Amnesty International Canada. He was eventually released, given the letters and exiled before moving to Toronto, where he was able to contact the group. Murray then invited him to share his story at a local meeting and spend a weekend in Napanee.

“It makes such a difference, it’s a hope for them,” Murray said. “There’s victims that have been in prison for such a long time, they think nobody knows they’re there,” she added.

Amnesty International finds its success by keeping requests straightforward, realistic and polite, Murray said. The Universal Declaration of Human Rights, a standard of treatment adopted by the United Nations almost 70 years ago, also provides a strong foundation for arguments.

The declaration guarantees a person crucial rights, regardless of race, gender, government or any other factor. Freedom of speech, the right to a fair trial and civil labour are a couple of essential examples.

“They’re not the other, they’re us. They just happen to be living in a place that doesn’t respect their rights,” Murray said.

Amnesty International Napanee meets at Trinity United Church on the fourth Monday of every month, at 1:30 p.m. from January to March and at 7:30 p.m. from April to December.