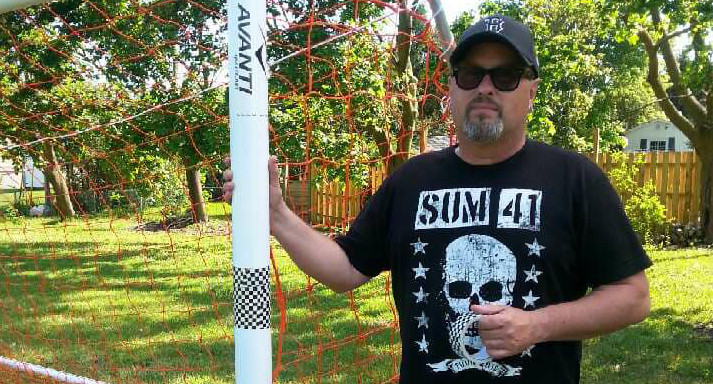 David Mills with a wrapped goalpost in memory of his son, Garrett — and in awareness about unanchored soccer nets. (Facebook)

It was a trip no parent should ever have to make, but one that Dave and Gwen Mills couldn’t miss.

The bill was named after their 15-year-old son, who died May 12 after a soccer net toppled on him at King Street Park.

“We wouldn’t have missed it for the world,” Dave Mills said, adding the shortly before his son’s tragedy, Garrett spoke about his desire to leave a legacy after his time on earth. Little did his family  know that time would be cut short just days later.

Since, Mills said he’s felt compelled to make sure that legacy means no families have to receive similar devastating news.

“God forbid this would happen to another family. That’s why we’re doing this,” he said.

Mills started a public campaign to inform the public about the importance of anchoring nets in the wake of the tragedy this year.

He was also encouraged by a co-worker at Quinte Broadcasting to speak to Smith, a former news director at that radio company.

They met and Mills said Smith left it to their judgment whether to push for an Insurance Act amendment that perhaps wouldn’t attract attention or push for the mandatory anchoring.

“What was really important for my wife Gwen and myself was accountability,” Mills said, hoping this approach would give more weight to the importance of anchoring goals. Smith’s staff put together the bill.

“I give credit where credit is due. Todd Smith’s staff completely did the legwork as far as drafting the legislation.”

In its present state, the legislation would require organizations or entities making movable goals available to the public to ensure they’re located on level services and secured — either using the manufacturer’s instructions, or if no instructions are available, securely attached to the ground (if outdoors) or to a wall or floor or weighted down (if indoors).

The  anchoring mandate  would be enforced through government-appointed inspectors and through public complaints. The penalty for contravening the act would be a fine of not more than $500 for each day the offence continues to a maximum fine of $5,000.

Kingston and the Islands MPP Sophia Kiwala, a Liberal, supported the Progressive Conservative Smith in introducing the bill — likely a good sign as it has bipartisan support, including a member of government. In introducing the bill, Smith noted more than 51 children across North America have died as a result of collapsing nets since 1978 and hundreds more have been injured. With soccer registrations increasing, so is the risk.

“We are continuing to put our children at risk, and are increasingly jeopardizing the lives of young soccer players and others who are simply hanging out on the fields where these moveable goals are located,” he said. “Learning from past accidents is paramount in preventing future deaths. Diligent anchoring of portable soccer goal posts cannot be ignored, and Garrett’s Legacy Act will assist in meeting this requirement.”

Smith called the day “very emotional” and said Mills “did a good job of telling what a great kid Garrett was and why the event was so tragic and unnecessary. All we needed to do is have those nets pegged and this all could have been avoided.”

The second reading of the act is slated for Dec. 7 and that’s when MPPs are able to debate its merits. It  will need to be read a third time before it becomes law.  Smith is hopeful Kiwala can keep it on the government’s legislative agenda.

Mills remains optimistic it will pass.

Successful legislation or not, Mills said he hopes the message gets out. He said if other parents or people in charge of reading nets were able to read the OPP reports about Garrett’s death, he feels it would be a priority for them to promote change.

Still, it remains a bit of an uphill battle to ensure people know. After all, Mills said before May, it wasn’t something he thought about because his family wasn’t involved in soccer. Now, perhaps news of his son’s death can help all families be aware of the risk and remind those responsible to mitigate it before tragedy occurs. In some cases, that hasn’t happened yet.

“As recently as today, I heard of a park not far from where I work where the soccer goals are not anchored down,” he said. “With all this publicity and attention, it does surprise me that especially in this area there’s this idea it’s not absolutely necessary to anchor these things.”

Smith said he is also hoping to get professional soccer players from Toronto FC involved to support the bill.