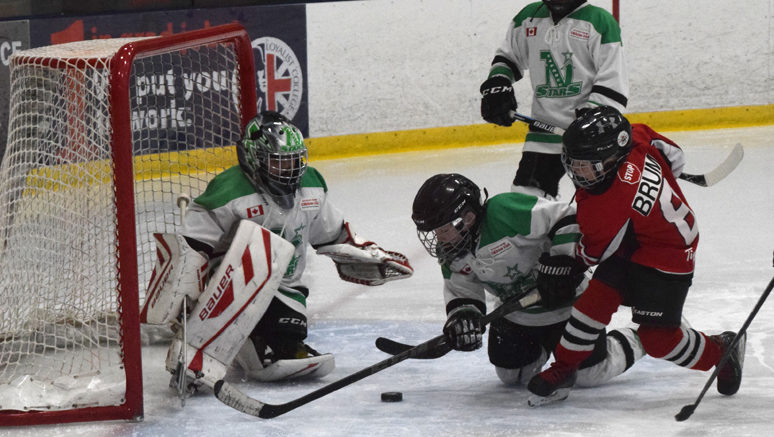 Callen Wilson of the Novice AFW Construction Stars attempts to clear the puck out of harm’s way in front of goalie Ethan Sabramsky-Nichol. Adam Prudhomme photo.

The Napanee Atom BB Stars were champions at the Northumberland Regional Silver Stick in Cobourg, defeating Peterborough in the Finals 3-2. To get there, they were victorious over Clarington 3-1 in the semifinals.  It was a strong comeback by the team after round robin losses earlier to Peterborough 3-1, and a 3-2 setback to Clarington. They also got by Kingston 4-1.  This qualifies them to play in Sarnia in January. Silver Stick does not have a BB category, so the teams were all moved up to A.

* The Peewee BBs were also in Cobourg, winning two of three, but then losing 5-0 to the eventual champions, Quinte West, in the semifinals. In the round robin, they shut out Peterborough 5-0, and Northumberland 4-0, as well as notching a 5-2 loss to Richmond Hill.

* The Joyce’s Meats and Deli Atom AEs, in an eight team grouping, made it to the final before losing to Saugeen Shores 2-1. They had conquered Tavistock 6-2 in the semifinals. They had beaten Saugeen Shores handily 7-3 in the round robin, tied Listowel 1-1, and got by Mount Brydges 1-0 to remain undefeated going into the final.

* The bantam and midget Stars both were in Midland for their Regionals, but each managed just one tie during round robin play.  The Bantams were shut out by Aurora and Collingwood, before tying Quinte West 1-1. The Midgets fell 3-1 to Erin-Hillsburgh, and suffered a 3-0 shutout facing Elmira before tying Huntsville 2-2.

* At the SPC, the Napanee Calderwood Automation Peewee AE’s were edged 3-2 by Baltimore. Nic Lamarche gave them an early lead, and Caleb South also tallied for the locals.

* The Napanee Country Traditions Bantam Selects beat Kingston 4-3 in a tough back and forth match.  Goalie Nolan Dwyer turned away many shots, while Elliot Mundle was able to turn a hat trick.