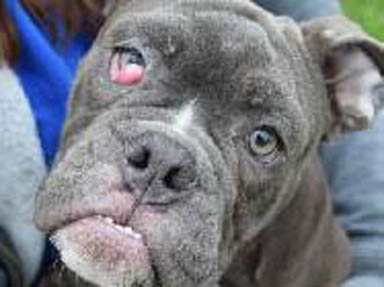 Successful surgery - The Lennox and Addington Ontario Society for the Prevention of Animals branch helped Waffles have surgery to clear up "cherry eye," a condition caused by a protruded eyelid. (Submitted photo)

Waffles the bulldog has a new look on life and the Lennox and Addington branch of the Ontario Society for the Prevention of Cruelty to Animals (L&A OSPCA) footed the bill for him.

According to L&A OSPCA animal centre manager Kristin Mullin, Waffles was brought into the shelter in October as a stray after being found wandering north of Napanee. His right eye was swollen and pinkish when he arrived — conditions linked to “cherry eye” or nictitating membrane, which Mullin says is common in dogs like bulldogs or boxers due to the shape of their face.

Mullin explains “unlike humans who have two eyelids, dogs have a total of three. Cherry eye occurs when the third eyelid, or gland, comes out of place, resulting in a heavily red/pink swollen mass.”

A veterinarian recommended the surgery right away and Mullin said the decision about operating wasn’t a difficult one even if it meant a $1,200 price tag for an organization that relies heavily on donations.

“He was an otherwise healthy, adoptable, friendly dog. We didn’t have any other concerns with him,” she said. “We decided to get it done as soon as we could.”

On Nov. 1, Waffles went in for surgery to have the eyelid repositioned, reducing the chance of it prolapsing or becoming infected again. He came through surgery just fine, though he’ll be on antibiotics for a couple of weeks and has had to wear a cone to prevent scratching the surgical site.

Though Waffles came in as a stray, Mullin said there were signs he had been someone’s pet.

“He knows how to sit and how to shake,” she said.

The L&A OSPCA followed its protocol for a three-day hold as it tried to find the family and appealed for them to come forward. No one did. Mullin said it’s possible the cherry eye was the reason.

While Waffles has had a few interested suitors since the L&A OSPCA shared his story on its social media accounts, Mullin indicated happy news about a forever home has already surfaced for the six-month-old bulldog.

“He was with a foster family while he was waiting for surgery. They fell in love with him and they’re going to be adopting him,” she reports.

That $1,200 cost comes of a budget supported by donations and fees for service. Mullin said the L&A OSPCA works will all the veterinarians in the Napanee area as well as some in Odessa and Kingston. All of them, she said have been “fantastic” in offering great care and affordable rates.

The costs add up considering the organization routinely looks after spaying and neutering, vaccination, and deworming as well as other required procedures as required. Animals coming in with conditions like lice infestations or ear infections must be addressed. Mullin said typically 10 per cent of the animals through the centre need dental work to fix chipped or painful teeth and a smaller number — like Waffles — need to have surgery.

She hopes the public will rally around Waffles’ success story to help other animals in the future.

“If we want to help the next dog or cat that needs a procedure, we need to replenish that fund,” she said.