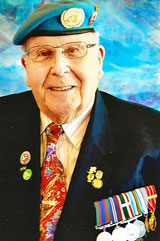 Passed away on October 29, 2017 at The Perley and Rideau Veterans’ Health Centre in Ottawa, at the age of 95. In his early years in Cape Tormentine, New Brunswick, Lyle was a lobster fisherman, carpenter and boat builder. He was also the “singing cowboy”, along with playing guitar and banjo in local bands. Lyle was in the Canadian Armed Forces for almost 25 years, retiring with the rank of Sergeant in 1972. After retiring from the Armed Forces he worked at several jobs, but the last one was the longest and most fulfilling. He was the Property Standards Officer in the Town of Deseronto from 1981-1987. He was superb at it. In retirement Lyle enjoyed boating on the Bay of Quinte and helping elderly neighbours. He loved working with wood and made many fine pieces of furniture. He also enjoyed working with semi precious stones to make jewellery. Lyle was instrumental in the creation of a WW I & II Memorial for the 170 men and women from his home-town of Cape Tormentine, New Brunswick and surrounding area in 1997. He was a member of the Deseronto Legion for over 33 years. In his 90’s Lyle restored a fiddle case which was a mosaic of thousands of slices of pine, oak and mahogany made by his father in the early 1900’s. Lyle leaves behind his wife of 71 years, Marion Elizabeth Drysdale, daughter Luetta (Jerome Guindon), son Robert (Lynne Gangbar), granddaughter Micheline Waring (Pablo Valesquez), grandson Robert Waring (Elizabeth Barrett) and great-grandchildren Rebecca and William Levy and Alexandra, Daniel and Aubrey Waring. He is predeceased by parents Alfred and Catherine Trenholm, sisters Cassie Trenholm, Helen Thompkins and Anita MacRae, brothers Edson and Francis and nephew Howard MacRae. In keeping with Lyle’s wishes, cremation has taken place in Ottawa. Lyle’s ashes will be buried in the Bayfield Cemetery in New Brunswick with the rest of his family as he had requested. The family will hold a private celebration of life. Condolences may be sent to the family by email…. jeromeandluetta@bell.net