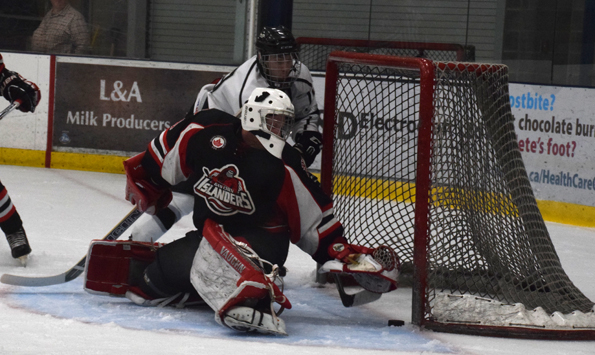 Napanee’s Ryan Casselman tucks the puck over the goal line while Gananoque’s Travis Frankland attempts to smother it with his glove. It was one of 20 goals scored during Friday’s game at the SPC. Adam Prudhomme photo.

It may have only been pre-season, but the Napanee Raiders looked to be in midseason form and then some as they shellacked the visiting Gananoque Islanders 20-0 Friday night at the SPC.

Jeremy Piazzi and Nicholas Nabuurs each saw 30 minutes in the crease, teaming up to block 12 shots in the shutout.

Friday’s game represented the only exhibition game of the pre-season for the Raiders, who will now get set to host the Port Hope Panthers in Friday’s season opener.

“We’re happy with the guys we added,” Raiders head coach Mike Hartwick said of the offseason. “The three big ones from Junior A (Austin) Labelle, (Reed) Kekewich and Casselman, to add players of that quality and character is great for the program but we’ve also added other guys as well, we’ve added veterans that have played with us before like Jeremy Piazzi, Kyle Hancock and we’ve got some veterans that played with us last year and we’re happy with what we have. We’ve worked very hard to make that happen but we’re still looking to get better.”

The coaching staff was busy making their final roster selections this week. The roster they ice on Friday night however is by no means set in stone.

“That’s just the way junior hockey is, stuff happens,” said Hartwick, noting how fluid the roster will be throughout the season. “There’s player movement and sometimes unfortunately there’s injuries. So we’ll just have to see.”

Hartwick did announce who would wear the ‘C’ this year, handing the captaincy over to Steven. He’s returning for his third year.

“He’s a quality guy and a leader,” said Hartwick. “He’s very consistent in his approach and with his attitude and cares for his teammates and he’s not afraid to push teammates to make them better. He was a logical choice.”

The Raiders will get an early test as they opened the season against the same team that ended their season in the last three league finals, and three-time Schmalz Cup finalists.

“They will be good, there’s no question,” Hartwick said of Port Hope. “They’ve got a real strong core back. They lost some guys but everybody does, so did we. Even this Gananoque team, we play them (on the road) Sunday and they’ll be a much different team. They were missing some players (in Friday’s exhibition match).”