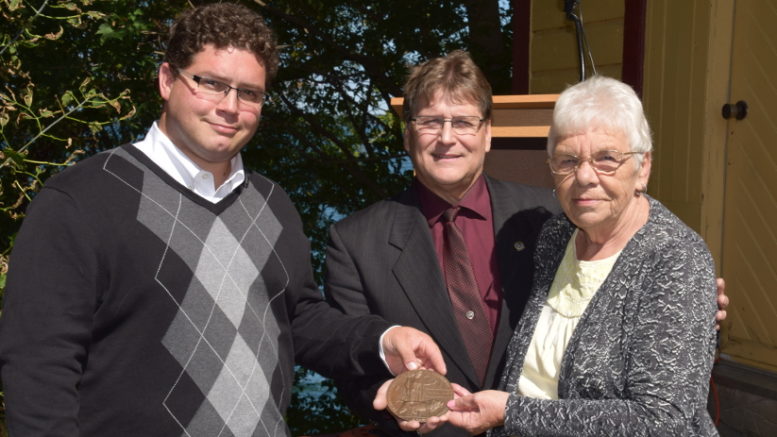 Chris Gauthier of North Bay (left) presents Amherst Island’s Herb Wemp and Carol Glenn with a ‘dead man’s penny’ which was issued to Oswald Wemp when he died in action in 1917. Both are related to the fallen soldier. (Adam Prudhomme photo)

Lance-Cpl. Oswald Wemp’s memorial plaque made its way home to Amherst Island on Saturday, 100 years after his passing.

On Saturday the First World War plaque was presented to members of the Wemp family, who in turn donated it to the Amherst Island Museum and Gallery where it will remain on display. What took it so long to reach the shores of Amherst Island, remains a mystery.

The plaque, which was colloquially known in the era as the ‘dead man’s penny’, was issued to Wemp’s family on Amherst Island after his was killed in action on May 3, 1917. It was the standard practice for the British military to issue the plaque to every fallen soldier’s next of kin. Somehow along the way, however, it took a century-long detour, where Christopher Gauthier happened upon it last summer, some 430 kilometres away from the island. “About a year ago, July 4, we were getting all these boxes out of an attic of the ONR (Ontario Northland Railroad), which is an old building in North Bay,” explain Gauthier, who along with his family was on hand to deliver the plaque to the Wemp family. “In the attic of this building there was just a bunch of boxes and we were just supposed to get rid of them and shred them. I was there one day lugging boxes all the way downstairs, it was July so I was sweaty, and against the baseboard in the far corner was this medal. I didn’t know it was a medal at the time. I thought it looked neat so I picked it up and I put it in my pocket. Part of me felt bad because I technically took it from the building, but it had a cool image on it so I wanted to know more about it.”

Some online research let him to Amherst Island, a place he’d never heard of much less ever been to prior to finding the Wemp heirloom.

“I looked into it and the Wemp history is actually online,” said Gauthier. “I started looking at that and I was kind of amazed and when I found out what the penny was for and what it was about, I figured I had to get it back to its rightful owners or a museum.”

Once he had a name, he took to social media where he eventually got connected with Herb Wemp, a descendant of Lance-Cpl. Wemp; his great grandfather was a cousin to the soldier.

“Oswald’s family moved off the island to go out west for a short time, but when the family came back to the island, Oswald stayed in Calgary and enlisted in the army on Jan. 3, 1915 at the age of 17,” Herb Wemp said during the presentation of the penny. “He became a private in the 89th Battalion but because of his strengths, he was transferred to Commander Arthur Bell’s 31st Battalion and eventually sailed to England.”

During this time the young soldier saw plenty of action on the front lines, taking part in battles in Belgium and France, where he took part in the Battle of Vimy Ridge. Shortly after he made the ultimate sacrifice, dying on the front lines after seven months of trench warfare.

“It’s a fitting remembrance and celebration, this being the 100th anniversary of the Vimy offensive and Canada’s 150th year of its birth of a nation,” Herb Wemp said of having the penny presented to his family.

Upon getting the penny from the Gauthier family, Wemp presented it to Carol Glenn, the treasurer of the board of the museum, who also has Wemp bloodlines. The medal is now on display at the museum for the public to view.

“I’m just fascinated by the whole thing and I’m honoured to give it back to where it should be,” added Gauthier. “I would like to know how it got to North Bay in the first place, but maybe we’ll never know.”