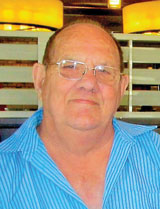 Peacefully, with his family by his side at the Kingston General Hospital on Thursday, August 24, 2017, in his 80th year. Beloved husband of the late Barbara (Asselstine). Dear father of Allison Abrams and Leta Hitchcock. Predeceased by his infant son Troy. Clifford will be sadly missed by his grandchildren and great-grandchildren as well as his sisters Betty (the late Tom) Gordon, Rose (the late Bruce) Thompson, Shirley (the late Frank) Roberts and his brother Victor (Leona) Abrams. Predeceased by his parents Thomas and Kathleen Abrams, his brothers Roy, Laverne, Ken, Don, Arnold, Jim, Milton, Newton and sister Doreen Austin. Fondly remembered by his nieces, nephews and friends. Cremation has taken place with Milestone Cremation Services, Napanee. A graveside service and interment will take place at the Riverside Cemetery on Friday, September 1, 2017 at 2pm. Friends desiring may contribute in his memory to the Heart & Stroke Foundation.

Online condolences can be shared with the family at www.milestonecremation.ca