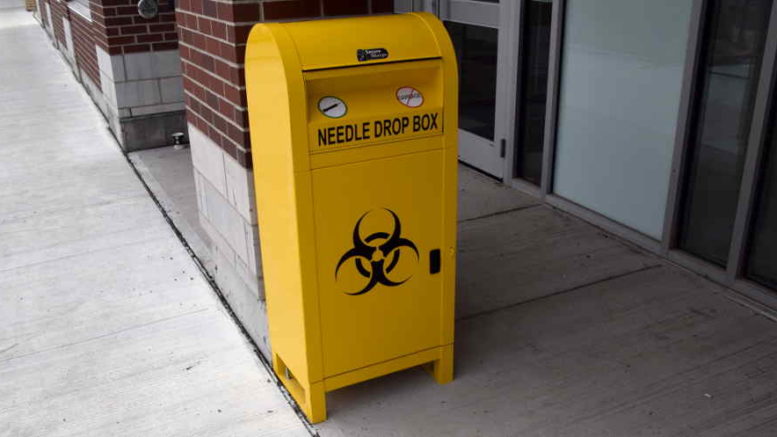 The bin was installed last week in front of the NACHC offices at 26 Dundas St. W. in Napanee, and is now receiving used sharps, NACHC Manager Anthony Moscar told the Beaver on Tuesday.

He said a similar program was rolled out in Kingston. Since the Kingston Community Health Centre administers the NACHC, it led the agency to investigate adding a new bin in Napanee.

“In Napanee, we have a harm reduction program where we supply harm-reduction supplies to the community, and we do take sharps back during the hours that we’re open,” he added. “But, there are hours that we’re not open. At 24 hours a day, potentially in the evening, people would like to drop sharps off, and there is no mechanism for that (until now).”

He said the bins are used in Kingston. “I don’t know the exact number for the number of bins (set up in Kingston), but they have put them into use, and it has been successful in terms of collection,” he said.

The municipality covered the cost of the bin, which was approximately $2,300. The NACHC will be responsible for ensuring the bin is monitored and emptied.

It’s hoped that, by providing the bin, instances of used needles being left in parks or other public places will be reduced. There are no restrictions on who is able to use the bin: anyone needing to dispose of used sharps and needles can dispose of them at the bin at any time.

Moscar said that the health centre was “thankful” for the support from the municipality on the project in a press release issued last week.