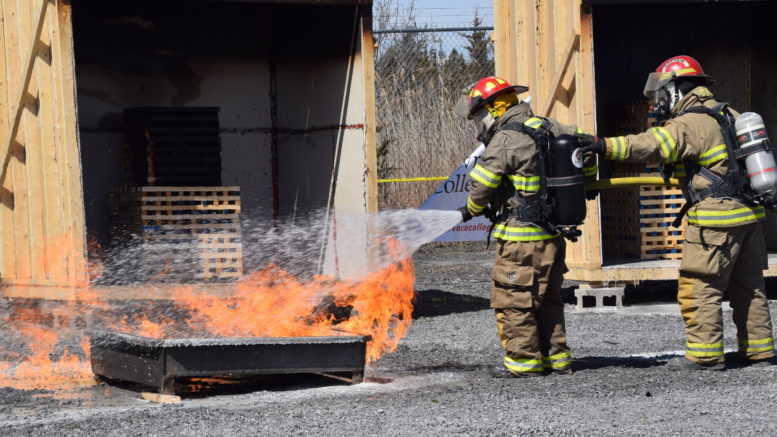 Firefighters use FireRein Eco-Gel to knock down a chemical fire during a demonstration in Loyalist. (Seth DuChene Photo)

Napanee’s FireRein Inc. is waiting to be called into the big game.

Officials from the local company, which produces a fire-suppressing ‘Eco-Gel’ water additive, are on-scene at wildfires raging in British Columbia’s interior. As of yet, however, the company hasn’t been given the green light to begin assisting with the firefighting efforts.

“We’re in the fire zone right now, so we’re just trying to see if we’re going to be used or not,” said Quincy Emmons, FireRein’s Brand Officer on Tuesday morning, adding that evacuations have been the main priority for those on the ground. “We are making progress, but it’s taking us a lot longer than we anticipated to get in and getting everybody comfortable with the product. There has been a little bit of an education for them.”

Emmons said that the company has two representatives in BC, along with equipment to get started. “We have a tactical on-demand system like we have for the Stone Mills Fire Department. We have one of those out there as well as our ‘Eco Trailer’ system, which is water supply, fire pump, hose and another on-board tactical system. But, the gel can be used through traditional equipment as well,” he said.

Emmons said he’ll head to BC with additional equipment and supplies when needed. “It’s our chance to help,” he said.

The corn-based gel, which is added to a water hose stream, is gaining buzz both inside and outside the firefighting community for its ability to more quickly knock down a fire, and without leaving potentially hazardous runoff. All the ingredients are food grade and completely biodegradable and non-toxic.

Besides fighting fires, the gel can also be applied to structures to help prevent ignition from adjacent fires.

Over the past few weeks, the wildfires have resulted in tens of thousands of evacuations and the destruction of nearly 200,000 hectares of land in BC.