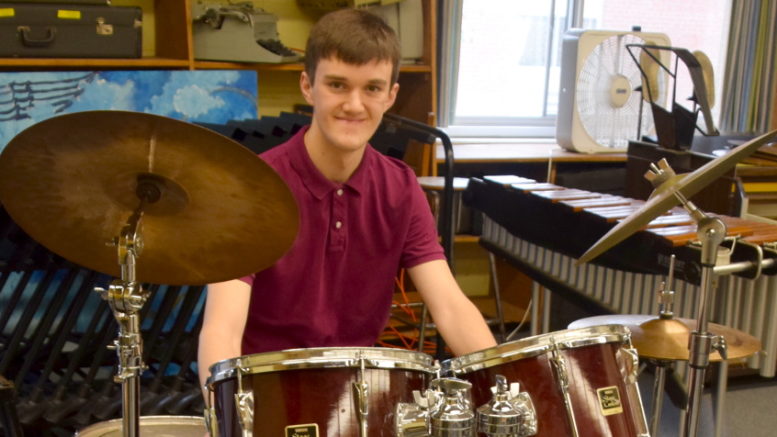 Keith Barstow’s passion for music, dedication to sports and outstanding commitment to school work was recognized by the staff at NDSS, earning him the prestigious Limestone Student Achievement Award.

The graduating Grade 12 was presented the award earlier this month, which is given out to one student per high school in the Limestone School Board who shows exemplary achievement in arts, athletics, leadership and academic standing.

Among his accomplishments is his musical ability, which shines brightest as an skilled pianist and percussionist. He has been a member of the NDSS band and pit orchestra since elementary school and is currently a member of the National Youth Jazz Combo, having competing with music students from across Canada to earn his position. Next fall, he’ll attend the University of Toronto on a full entrance scholarship to study music.

“It’s great to be recognized not just by my school but within the whole school board,” Barstow said of the Limestone Student Achievement Award. “I feel honoured.”

Barstow completed his final exam with NDSS last week, having never earned a mark below 80 per cent in any course, with most marks exceeding 90 per cent. He also took part in extracurricular activities at the school, playing on several sports teams during his tenure at NDSS.

It’s his love for music that he hopes to turn into a full-time career however, whether it be as a professional musician or music teacher. He has already demonstrated a keen ability to mentor the next wave of musicians, taking the time to help younger classmates. He has played the Limestone Learning Foundation Crystal Ball and with the local band Sing Sister, earning several Kiwanis awards for his piano playing abilities along the way.

He didn’t need to look for inspiration, coming from a very musical family.

“My mom went to Queen’s for music, she played oboe in the Kingston symphony and then became a music teacher (at NDSS),” he said. “My dad played music in high school but he pursued art. It was very important to them that their kids have music in their lives. We have pianos at our house, drums set up downstairs and a bunch of other instruments laying around and we all had lessons as well.”

Before heading to U of T he will spend his summer playing jazz festivals in Toronto and Niagara Falls.

Having played at the graduation of NDSS students since he was in Grade 4, he’ll fittingly play his final piece for the high school this evening at his own graduation as NDSS’ class of 2017 holds its ceremony at the Strathcona Paper Centre.