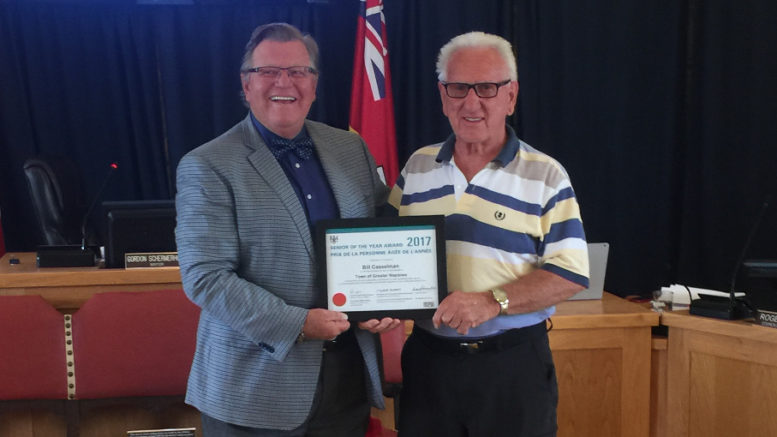 Bill Casselman had no idea why his family insisted he attend Tuesday’s Greater Napanee council meeting, or why so many friends and family were in attendance.

It all became clear shortly after the meeting started however, when Mayor Gord Schermerhorn announced he had been named the 2017 Greater Napanee Senior of the Year.

From serving on the Napanee District Minor Hockey Association executive to performing some volunteer groundskeeper work during Napanee Express tournaments, Casselman has made a positive impact throughout the town.

“This past year a good friend and neighbour had a heart attack,” Schermerhorn said, reading the nomination form submitted by Casselman’s daughter. “During his recovery, Bill mowed the grass, weeded his flower beds and shoveled his driveway. He also visited him often, bringing him his favourite foods and providing him with companionship.”

Throughout the winter months, Casselman volunteers at the Napanee and District Curling Club, teaching curling to members of Community Living’s Special Olympic team. He also continues to help maintain the ice rink at Westdale Park, despite having moved out of the neighbourhood last year.

“Bill does many of these things without anyone else knowing,” Schermerhorn continued. “He doesn’t do it to get gifts, he does these kinds things because he cares for people.”

The mayor then presented Casselman with a plaque to honour the occasion.

“Nobody’s more surprised than me,” said Casselman. “I’ve enjoyed every minute of it. Half the time I didn’t even realize (I was volunteering), I guess.”