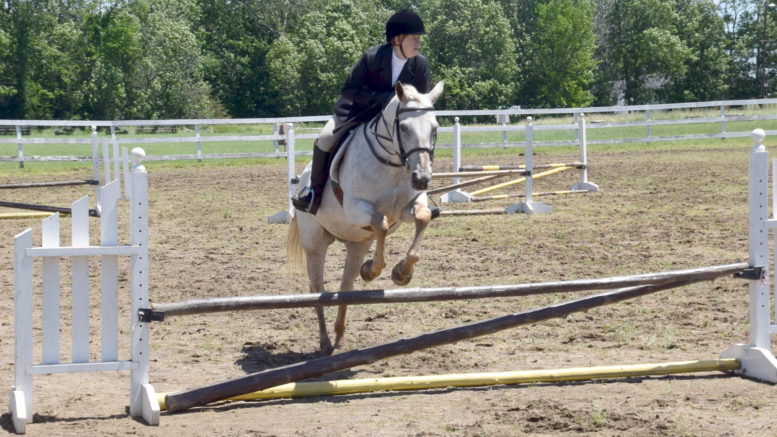 Catherine Nicol and her horse LP Pocos Sugar make a jump during a show hosted by the Odessa Horse and Pony Club, held on Saturday at the Odessa Fairgrounds. The event drew 30 participants for halter, English performance, Western performance and games divisions.

Members of the Odessa Horse and Pony Club put their riding abilities on display at their second show of the season on Saturday.

The weekend show is one of four that the club will hold during the course of the year. Next up is the Odessa Fair (July 15), followed by their year-end show on Sept. 9. 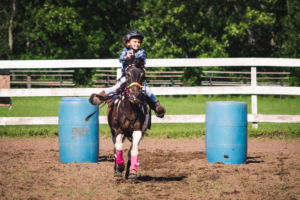 The club, a non-profit organization that has operated since the 1970s, has riders of all ages and skill levels. “We’re all about having fun,” says the club’s president, Jacqueline Cote.

There is a variety of classes in which members participate: halter classes, where you lead your horse or pony; English (riding and jumping); and Western (riding, trail and gaming classes). The club wraps things up at the end of the year with an awards banquet.

Cote said that Saturday’s event was a good one. “Overall, things went pretty well… Our members really enjoyed themselves,” she said.

“One thing I can tell you about the club, it was probably the first horse club in that area back then,” said Deanne Robinson, one of the club’s most senior members, describing how the club has evolved over the years. “Before it was formed we used to show at a place on McIvor Road at a private place who had an outside show ring there.  After that was when the Odessa Horse Club started. The club was initially a Western horse club. There were Western games. People with horses came from all over the area back then and showed.  We had over 40 horses participating in the fames. The performance classes were huge also (20 to 30 in a class). The halter classes were also large.”