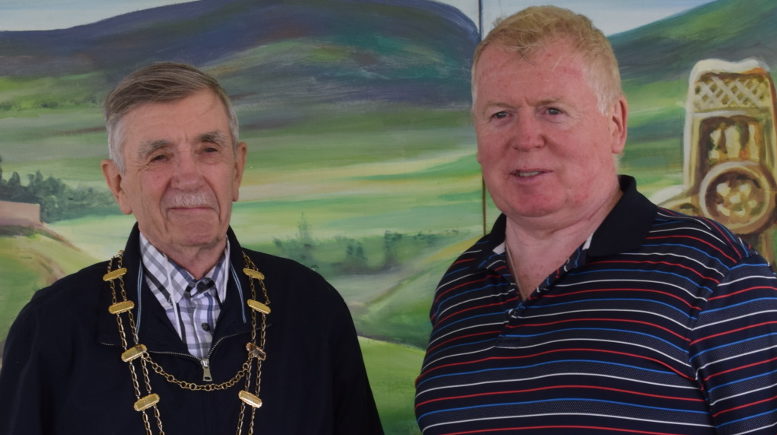 Brian O’Baoill (left), president of the Oireactas festival in Ireland and Irish language expert Liam Ó Maolaodha were in Tamworth this weekend to take part in the Oireactas Gaelige Ceanada, held at the Gaeltacht. (Adam Prudhomme Photo)

Amongst the fun of the fiddle tunes, Irish step dancing and singing at this weekend’s Oireactas Festival in Tamworth, there was something much more important going on.

At the heart of the festival was advancement of the language known as Irish Gaelic, which is rarely spoken outside of Ireland. Dating back to the fourth century, it has experienced a sharp decline among immigrants who have adapted the mother tongue of their new homeland. That’s one of the reasons Tamworth’s Gaeltacht first launched the Oireactas Festival, which celebrated its seventh running this weekend. It included Irish singing, instrumentals, poetry and spoken language competitions.

“It’s important that we save as much of (the Irish language) as we possibly can,” said Liam Ó Maolaodha, who made the trip from Ireland to attend last weekend’s festival. He worked closely with Aralt Mac Giolla Chainnigh in establishing the festival in Canada. “Even at home it’s not in the strongest possible health,” he adds.

Ó Maolaodha says there are enough people who speak the language in Ireland that it will survive into the next two generations, but as the world becomes more connected through online social media, it creates less of a desire for younger people to learn the ancient language.

“There are something like 6,000 languages in the world today,” said Ó Maolaodha. “There’s talk in 20 years times there may be as few as hundreds, not thousands, with so many of them dying away. As things stand the population at home speaking Irish is sufficient to carry it certainly into the next generation or two, but it’s important that it grows, that it develops and moves with the times.”

Festivals such as the one held in Tamworth, as well as similar ones in New York, Boston and Milwaukee, are a good way to grow the culture, says Ó Maolaodha. The more exposure the Irish culture can get in North America, the more second or third generation immigrant youths will want to learn their history.

“For such a small country off the western coast of Europe, we seem to have this influence,” said Ó Maolaodha. “You take St. Patrick’s Day, it seems to have a resonance all over the world, I don’t know why that is. It’s hard to believe that it’s only 50 some odd years ago that Irish traditional music was seen as dead in the water. People like the Chieftains and so on came along and brought it to the rest of the world and people showed interest in other aspects of Irish culture, the story telling, the dancing. We have this influence beyond our size. We like to think so in sport also-but not always.”

Ó Maolaodha was one of several fluent Irish speakers who made the trip overseas to Tamworth to judge the singing and speaking competitions.

With another festival in the books, the staff at the Tamworth Gaeltacht will continue to do their part to grow the culture, offering lessons and aiming to foster a community where people can gather to speak and study the language.