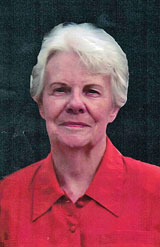 Surrounded by family, it comes with great sadness to say one of the strongest women known has passed after a very long courageous battle with cancer. Frank Sinatra comes to mind when thinking of her “I Did It My Way”. She did just that. There is only respect when it is thought of how she handled these last few years with dignity. We were fortunate enough to be able to celebrate her 80th birthday in April. She is survived by her husband Keith F. of 63 years, son Roy, daughter Holly Hill (Larry), sister Grace Jeffries (predeceased by Ken Cavanagh), brothers’ Neville McCrimmon (Lois), Reg McCrimmon, grandchildren Sierra, Savannah, Madison and Hayden as well as many nieces and nephews, her Aunt Annie Huff in her 99th year and her cousins, predeceased by her mother Edna McCrimmon. Honourary daughters Cara Donaldson (Kevin), Tracy Smith (Jeff) and Erin Carr (predeceased by Martin). Thank you to the nurses in the Heritage wing at Providence Care and on Kidd 9 at Kingston General Hospital as well as Drs. Chris Frank, Julie Mc Carthy, Natalie Kondor and Ingrid Harle from the Cancer Clinic as well as her GP Dr. Charlie Barr. She was also followed by Dr. John Jeffrey before he retired. Thank you also to CCAC, CBI and St. Elizabeth’s for their wonderful care while mom was at home, specifically Pat Young and Diane Amaral who were the PSW’s that spent every Thursday with mom comforting her and keeping her company and were there for her right up until the end. Thank you to all of you who stood by us throughout this journey, checking in and reassuring with a few kind words here and short visits to mom. You will never know how much this has truly meant to all of us. Private grave interment will be held at a later date at the Zealand Cemetery in Sharbot Lake as requested. Date yet to be determined. A Celebration of Life will be held at Holly Hill’s at 4933 Holmes Road in Inverary, Sunday July 9, 2017 from 1pm-4pm for those that wish to come out and celebrate the woman she was. All donations in Elizabeth’s memory can be made to UHKF Cancer Centre of Southeastern Ontario 4-55 Rideau Street Kingston, Ontario K7K 2Z8.