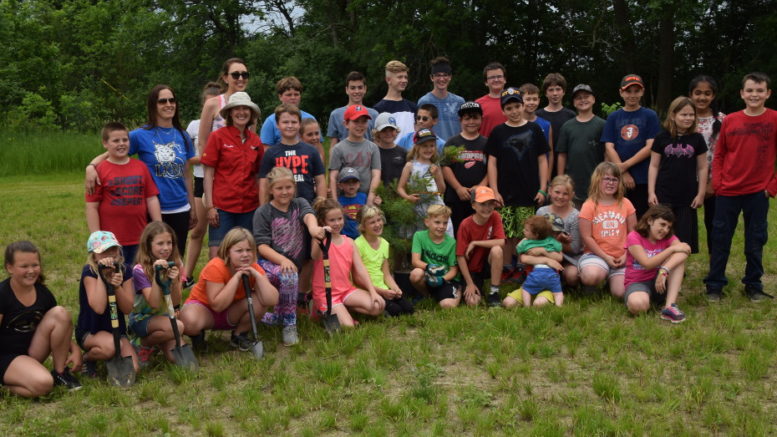 Mrs. Dupuis’ Grade 7 class and Mrs. Hall’s Grade 4 class and others gather for a photo before getting back to work, planting several different species at the school’s new soccer field. (Seth DuChene Photo)

With the help of Home Hardware Napanee and Trees Canada, one Grade 4 class and one Grade 7 class planted a number of shrubs and trees around the school’s new soccer field. Along with lilacs surrounding the field, the students also planted what will become a forest of native species at the soccer field’s northeast corner. All totalled, more than 100 trees were planted on Thursday.

The planting was also held in conjunction with National Tree Day and the 150th anniversary of Confederation.

“This is our native forest, so we’re trying to look as ‘random’ as we can in a narrow space. They are all native species,” said Marsha Beebe of Napanee Home Hardware, who along with representatives from Greater Napanee council and Trees Canada, helped the students plant the new trees.

While it’s hoped that it will become an ‘outdoor classroom’ for future students, Beebe says she also hopes it will become a home to animals. “We’re hoping to provide some habitat for some native species. We’ve left the centre open so that the kids can come and gather, sit down as a class, and then hopefully learn about the trees and anything that might be living in them,” she said.

It also represented the first time students were allowed on the new field, which has been under construction and cordoned off for several months. “This is their first experience being on this space… and now they feel like they’ve had a hand in it,” said Beebe.