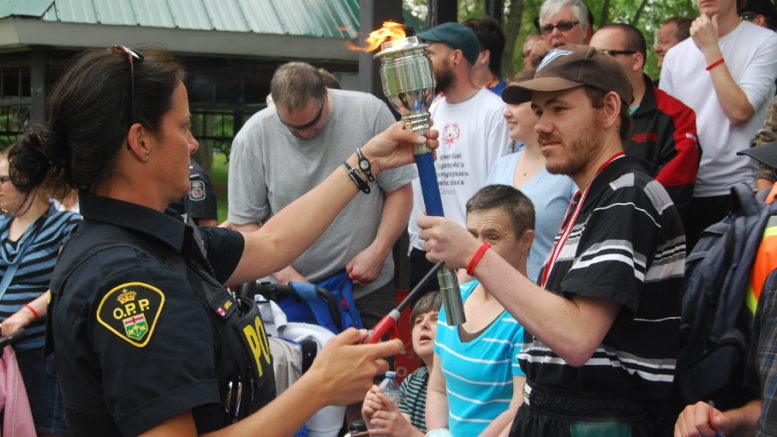 The Law Enforcement Torch Run is an annual fundraiser for Special Olympics in Ontario. (File photo)

Special Olympic athletes will be joined by law enforcement officers will join forces to raise awareness and funds for their cause tomorrow morning as they carry a torch through downtown Napanee.

Starting from Conservation Park at 10:30 a.m., the group will jog towards Giant Tiger, where a special presentation will be made to Quinte Region Detention Centre correctional officer Carol French to honour her years of volunteering with the Special Olympics.

She’ll be presented with the Distinguished Service Award, which is the highest award offered at the provincial level for the Law Enforcement Torch Run. A fundraising barbecue will also be held in the Giant Tiger parking lot.

During the run the torch will be carried by athletes and law enforcement officers alike as a symbol of hope.

This will mark the 30th year the Torch Run has been held in Ontario, having raised $35 million over the years. Money raised from the event will go towards covering things such as travel costs, meals and equipment for Special Olympic athletes. The success of the program is directly related to the success of the torch run, as it is a major source of funding for the programs they offer for all levels of athletes.

Online donations can be made by visiting www.SpecialOlympicsOntario.com.