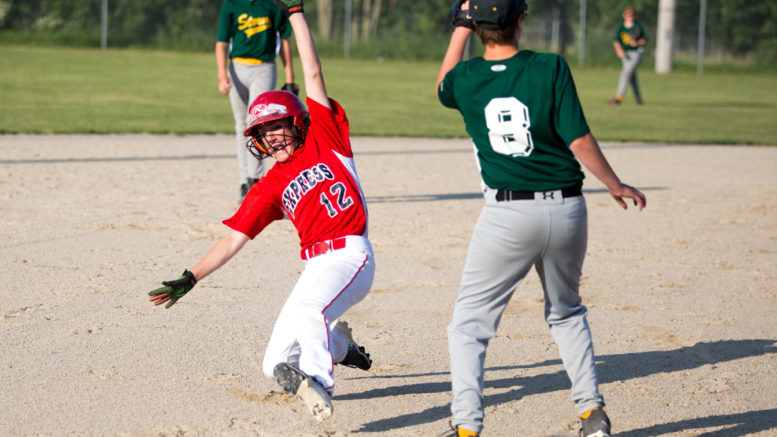 Bryson Gilpin of the Canadian Tire Peewee Express slides into third with an RBI triple during a league game against the Westport Storm, held Tuesday night at the Napanee Fairgrounds. The game was a great tune up for the Express as they prepare to host the OASA U14 Eliminations June 30-July 2. (Adam Prudhomme Photo)

Softball teams will travel from all corners of Ontario to Napanee June 30-July 2 when the Express host the OASA U14 Peewee Eliminations.

Including the host Canadian Tire Napanee Express, a total of 19 teams will square off at the Fairgrounds and North Fred fields throughout the weekend double-knockout tournament. They’ll all be aiming for at least a top six finish as the top four teams qualify to represent Ontario at the Canadian Fast Pitch Championship in Palmerston, Ont. Aug. 9-13. The fifth and sixth place teams will head east to New Brunswick for the Eastern Canadians, Aug. 24-27.

Heading into the tournament the host Express team has every intention of playing for a top four finish. Though young, the team has gelled together quickly and has already surprised some more experienced clubs this season.

The Express already have one tournament victory under their belt this year, winning in Stouffville. That tournament featured close to half the teams they’ll see at the eliminations. Some of the western Ontario teams, which figure to be among the stronger clubs in the upcoming tournament, have yet to face Napanee.

Qualifying for Nationals would be a first for this age group. Though they may not have the experience of playing a game with a trip to Nationals on the line, they will have the advantage of playing in front of the home town crowd.

“The kids are excited,” said Thompson. “We have the first game after the opening ceremonies so we’re hoping for a big turnout for that. The kids are really excited to play at home.”

The Express will open their tournament on June 30 at 8 p.m. taking on the winner of the New Hamburg and Rostock game, which goes at 4 p.m. The opening ceremonies will be held just prior at 7:45 p.m. A total of 36 games will be played throughout the weekend at both the Napanee Fairgrounds and North Fred fields.

The large field marks a noticeable increase from previous years as interest in the sport of softball seems to be climbing. Perhaps not surprisingly, the numbers seem to coincide with the national growing interest in the Toronto Blue Jays, who have put together back-to-back playoff appearances and enjoy some of the largest attendance numbers in Major League Baseball.

“It seems to be a couple of age groups coming back really strong, especially in the east,” Thompson says of the increase in the amount of softball teams registered for the eliminations. “There’s more teams showing up than in years past and we’ve got a couple more teams to play now that we have more interest in this area.”

Should the Express win their first game, they would advance to play the winner of Tavistock and Brussels at noon on Saturday. An opening game loss means they’d play for their tournament lives at 2 p.m. on Saturday.

The championship game will go on Sunday at 3 p.m.

Along with hosting the tournament, Softball Napanee will also be holding its annual Canada Day duck race on Saturday, starting at 2 p.m. The fundraising event sees participants buy a numbered rubber duck which is dropped down the Napanee River waterfall. The owner of the fastest duck wins a cash prize while the rest of the proceeds goes back into the local softball program.

Elsewhere on the Canada Day weekend the U18 midget Express boys will be in Owen Sound for their provincial qualifier. They will be part of an 11 team field competing for four spots in Nationals.