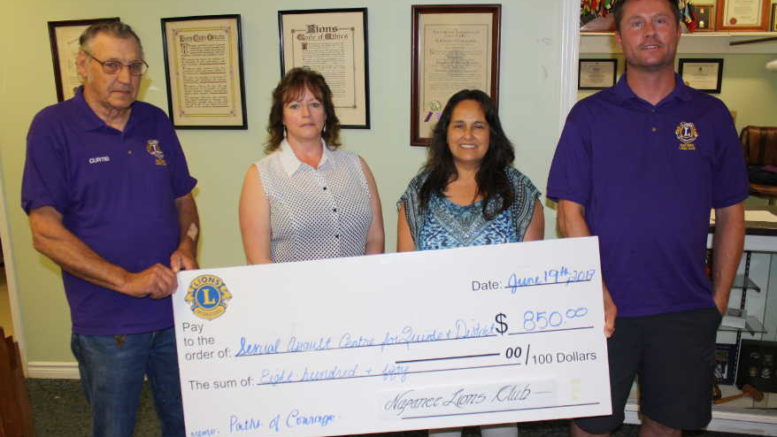 On Monday night, the Napanee Lions Club donated $850 towards the Sexual Assault Centre for Quinte and District  — and specifically, the organization’s ‘Paths of Courage’ healing and retreat centre.

That centre, according to Elise Hineman, Executive Director for the SACQD, allows sexual abuse survivors to  take a break from their daily lives for a week to participate in various recreational activities. It also affords an opportunity for participants to reach out to others who have had similar experiences. For each one-week program, 10 participants take part. The healing and retreat centre is located in Prince Edward County.

Hineman says that the Paths of Courage program operates 12 weeks a year.

According to Ashley Free, a Lions Club member and a participant in the Paths of Courage program, the program can a have a huge, positive impact. “It made a big difference,” he said. “I have a leg to stand on now.”

Free said it’s also important to bring awareness to the impact of sexual abuse, and to combat the stigma around people talking about the issue.

The SACQD, located in Belleville, has been operating for more than 25 years, serving the residents of Hastings and Prince Edward Counties. Hineman says that the centre sees more than 400 individuals every year, all of whom are self-referrals.

For information about Paths of Courage program, call 613-476-7000 or visit www.pathsofcourage.com.