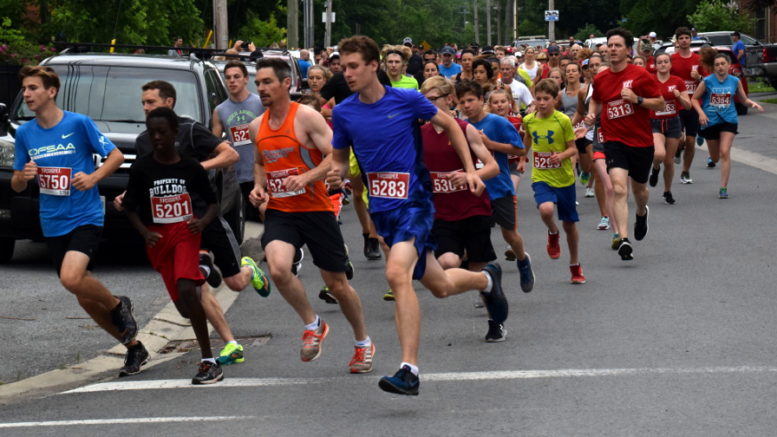 Runners make their way around the first corner during the Napanee Heritage 5K on Saturday. Carter Free (No.5283) would go on to win the race in record time. (Seth DuChene Photo)

Organizers of the second annual Napanee Heritage 5K race and Kids’ One-miler say that they’ll be back for the third annual event in 2018.

Building off the success of the inaugural event in 2016, the race attracted more than 350 for the adults’ 5K, while the kids’ shorter race was sold out with 100 participants.

Ocean Fierz of Bath crossed the finish line first in the Kids’ One-Miler with a time of 6:11. (Seth DuChene Photo)

“We were so humbled by the community support we received for the second annual event,” said organizer Heather Giffin.

She said a highlight was having Kevin Goligher of the Napanee and District Caledonia Pipe band lead the runners from the L&A County Museum and Archives to the starting line on Thomas Street. “We were also honoured to have local musicians Sam and Emma McNichols providing live entertainment,” she added.

New course records were set this year by Carter Free (16:40) and Charlotte Dory (21:08) in the men’s and women’s category, respectively.

Twelve-year-old Ocean Fierz sprinted her way along the course to win the kids’ race.

This year’s race should provide a legacy to future runners, too. All proceeds for the event will go toward the repair and rejuvenation of the outdoor track facility at Gibbard Field at NDSS.

Zachary Wilde (left) and Nathaniel Stacey finish one lap of the Kids One Miler race on Saturday. (Seth DuChene Photo)