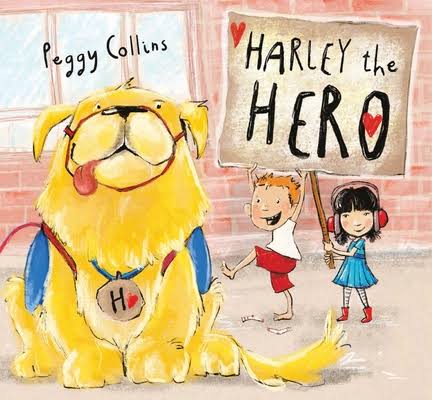 The cover for Peggy Collins' latest book, Harley the Hero, which was inspired by students and a teacher from Selby Public School.

Local author/illustrator Peggy Collins didn’t have to look far for the inspiration for her latest picture book Harley the Hero.

During one of her many pre-COVID-19 classroom visits to Selby Public School she met teacher Sherri Richards and her service dog Stanley. Throughout the day Collins noted the service dog not only helped the teacher, but had unique interactions with the young students as well. Kids that were normally very loud and lively outside the class would become very calm and careful around Stanley.

“I went home after our first day and I thought I really want to write a story about this dog,” recalled Collins. “I asked Sherri when I was there the second day and I told her I have some ideas and I asked her how do you feel about this? She said ‘that’s great.’”

The story tackles some rather heavy topics such as PTSD and autism, but does so in a way that is both entertaining and informative for the target audience of ages four to seven.

The main characters are Jackson and Amelia, two students in Mrs. Prichard’s class and of course, Harley.

“(Amelia) is on the spectrum but we don’t talk about that directly,” said Collins. “It’s more about the things she likes and the things she doesn’t like. One of the things she doesn’t like is the fact that Harley likes to lick feet. So she wears two pairs of socks and rubber boots in the classroom because she really likes Harley but she really doesn’t like her feet being licked. That came about because we were trying to figure out what funny little things we could do with Harley, so I would ask Sherri questions like ‘does he do this?’ “I want to put this in the story, is this a reasonable thing that might happen?’ She was great with answering all my questions and giving me some ideas.”

While not directly addressed in the story, the notes in the book outline the topics that are covered in the book. Collins said it was important to her to tell a story that included a character with PTSD as well as a service dog.

The students in the story were also inspired by students from Selby Public School, including Gage Smith, who unfortunately passed away last September. Collins reached out to the family and got their permission to include his likeness in the book, her way to pay tribute to an important person who meant so much to the community.

“There’s a whole bunch of things happening in a pretty simple format,” said Collins. “All the kids in it are kids that I know and all the artwork in it are from kids in Sherri’s class.”

The climax of the story involves a small fire breaking out in the classroom-another incident based on a true story. When all the other students exit the building, the loud sound of the fire alarm causes Amelia to get overwhelmed and hide. It’s then up to Harley to coax her out of the school-which he does by licking her feet.

“It was so fun to do a book about the community that we live in,” said Collins. “I don’t get to do that very often. They’re about bigger ideas and they usually have to be less specific. This was such a specific thing that I got to be really specific but still hopefully resonates with people, but for the people here they just know who everyone is and what it means.”

Harley the Hero is available at Bath’s Books on Main, Kingston’s Novel Idea or online at https://pajamapress.ca/book/harley_the_hero/.

Collins, Richards and Stanley-the inspiration behind Harley, will be signing books at Kingston’s Glocca Morra Studios July 17 from 10 a.m. to 6 p.m., located at 1623 Hwy 15 in Kingston.

Looking ahead to the fall, Collins’ artwork will appear in Barhram Rahman’s A Sky-Blue Bench, which is due in November.

The picture book tells the story of Aria, a young girl in Afghanistan who lost her leg in an accident. Now with a prosthetic leg, she finds it difficult to return to school where she’d have to sit on the floor-and so she sets out to build a bench. Much like Harley the Hero, this book will focus on a rather heavy topic but does so in a way that kids can understand and learn a moral.

Earlier in April her drawings were included in Hungry for the Arts, the third in a series that includes Hungry for Math and Hungry for Science. This book will include a collection of poems and is written by Kari-Lynn Winters and Lori Sherritt Fleming.