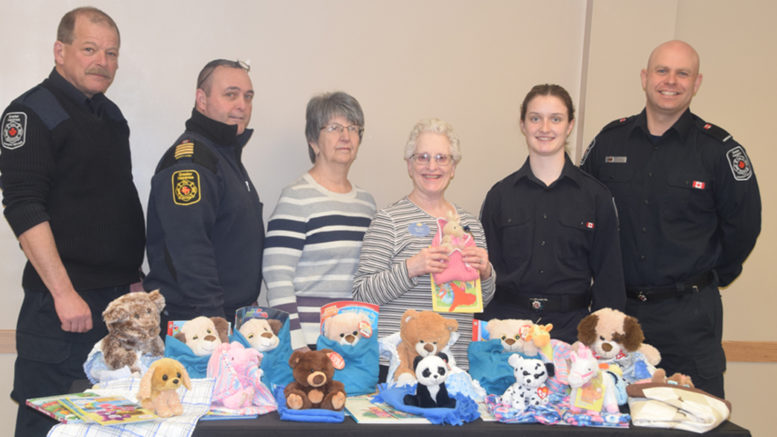 Again this year, the 10-member Victoria II Women’s Institute joined with members of branches across Ontario to take part in the Books, Blankets and Bears campaign. They matched stuffed animals with bright hand-made blankets — knitted, crocheted, or sewn with care — and age-appropriate books and brought them into the fire hall.

“They ride on our front-run pumps,” said GNES public educator Randy Cook. “We hand them out where there’s been a child involved — we do a lot of medical-related calls with the ambulance. If a child is home where someone else has suffered a medical emergency, or been in a motor vehicle accident where the sock and awe is too much for them, or maybe a house fire or carbon monoxide scare. It sure brings comfort and shows them someone cared.”

Valerie Smith, a Victoria II member and regional board director of the Federated Women’s Institutes of Ontario (FWIO), said the idea started with a provincial contest for members to write a book about a bear named Quincy. About a decade after that contest, the FWIO decided it would have its branches distribute remaining copies of Loreen Ambler’s children’s book in comfort packages for youth in need. Though the book is out of publication, the giving continues on as members see fit.

“Many groups give them to hospitals, police stations, even schools,” Smith said. “It’s a province-wide initiative and in our district, the other branches are doing it too. You’ll see lots of photos of many other branches across the province that have donated to various areas.”

According to Smith, those donations are always timed to fall close to Feb. 19, the anniversary of the founding of the Women’s Institute 122 years ago. That day has special meaning this year for the rural women’s education and advocacy organization as this is the centennial year for the FWIO and the Federated Women’s Institutes of Canada. As long as Victoria II has been participating, Smith said its members have chosen to work with the fire department. They were inspired to make that connection after Jessica Boomhower spoke at one of their meetings. In 2014, the 20-year-old GNES volunteer firefighter suffered a brain bleed while training at the Dorland station. She made a positive impression with her positive attitude in recovery and her dedication in continuing to help those in need in her community.